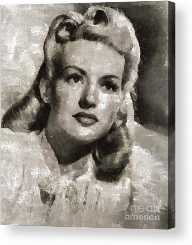 Betty Grable was a famous American actress, dancer, pin-up girl and singer. Making an acting debut at the age of 12, she rose to stardom with a role in the musical film Down Argentine Way, 1940. She also had immense success in films like “Mother Wore Tights,” 1947,“How to Marry a Millionaire” and in the Broadway musical “DuBarry Was a Lady” in 1939.

Betty Grable’s top-class performance, she made a record by appearing 12 consecutive years in the box office’s top ten stars. Earning more than 3 million in her career, the U.S. Treasury Department named her as the highest-salaried American woman in 1946 and 1947. Grable starred in about 42 films in the 1930s and 1940s, which grossed over $100 million.

Betty Grable was born on December 18, 1916, in St. Louis, Missouri as the youngest child of Lillian Rose (née Hofmann) and John Charles Grable. Her father was a stockbroker. As a child, her materialistic mother put her under intense pressure to become a performer. She, therefore, enrolled to participate in beauty contests winning most of them. This brought her the needed attention to pursue her future career.

In 1929 at the age of 12, Betty Grable traveled with her mother to Hollywood in her bid to start a career in the entertainment industry. While there, her mother lied to producers and casting agents that she was 15 years instead of 12 years to get her a job. Her first role was an uncredited one as a chorus singer in Happy Days, 1929.

The following year, she was signed by producer Samuel Goldwyn under the pseudonym  Frances Dean, to join Goldwyn Girls. Other members include Paulette Goddard, Virginia Bruce, Ann Sothern, and Lucille Ball. She started playing minor roles in movies including Whoopee!, 1930, starring Eddie Cantor.

In 1932, RKO Radio Picture offered her a contract. In order to polish her skill, the studio also assigned her an acting, dancing, and singing classes. Betty Grable debut credited film role under RKO was Probation, 1932. She moved on to played big roles in The Gay Divorce, 1934 and Follow the Fleet in 1936. After her contract with RKO ended, Paramount Pictures signed her but lent her to 20th Century Fox to star in the Pigskin Parade, 1936.

Betty Grable returned to Paramount to play roles in films like This Way Please, 1937, College Swing in 1938, and starring opposite her then-husband Jackie Coogan in Millionaire Dollar Legs, 1939. All this while Grable has not achieved much success and Paramount also decided to relieve her of the contract. The frustrated Grable planned to leave Hollywood but then upon a second look decided to try her luck on Broadway.

Betty Grable rose to fame with her role in the Broadway musical DuBarry Was a Lady in 1939 after accepting the offer from Buddy DeSylva. The play was a very successful and that was a huge leap towards a successful career. Her performance in the play gained the attention of Darryl F. Zanuck, head of 20th Century-Fox who decided to cast her in the musical film Down Argentine Way, 1940. The role was to be played by actress Alice Faye but who declined it for health reasons. The film was very successful critically and at the box office.

The success of Down Argentine Way gained her several other roles becoming a newfound star in the film industry. She followed it with roles in Tin Pan Alley, 1940 co-starring Alice Faye, Moon Over Miami, 1941 co-starring Carole Landis, A Yank in the R.A.F, 1941 Co-starring Tyrone Power and I Wake Up Screaming, 1941 co-starring Victor Mature.

The following year she starred in Song of the Islands, co-starring Jack Oakie, and Victor Mature. Other roles include Footlight Serenade, 1942, Springtime in the Rockies, 1942. The latter became one of her biggest hit grossing $2 million.

In 1943, American movie exhibitors voted her the number-one box-office draw. Other roles include Sweet Rosie O’Grady, 1943, Pin-Up Girl, 1944, which was a huge box office success, Diamond Horseshoe, 1945, The Dolly Sisters, 1945, The Shocking Miss Pilgrim, 1947, and That Lady in Ermine. Grable became very popular and the highest-paid entertainer in the United States in 1947. She became a famous sex symbol in the film industry.

During the latter days of her career, Betty Grable had her popularity waned in a way because she was ageing. She also had issues with 20th Century Fox on deciding which films to make and a pay rise. Grable’s sometimes boycotted role and in response was suspended by Fox. She, however, had roles including Wabash Avenue, My Blue Heaven, Call Me Misterm 1951, Meet Me After the Show, 1951, How to Marry a Millionaire, There’s No Business Like Show Business, 1954, Three for the Show, 1955, and How to Be Very, Very Popular, 1955.

Betty Grable married twice. Her first marriage was to former child actor Jackie Coogan. They divorced two years later. She then married trumpeter Harry James in 1943 with whom she had two daughters Victoria Elizabeth and Jessica. The couple married for 22 years divorcing in 1965. She went on to date dancer Bob Remick, remaining with him until her last breath. Grable died of lung cancer on July 2, 1973, at the age of 56.