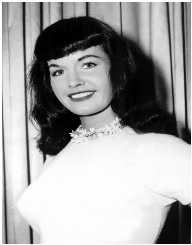 Bettie Page was famously known as the queen of pin-ups in the 20th century. She was more than just a beautiful and attractive model. But what do I say, her locks were as dark as night and smile as epic as poetry. She was simply a crème de la crème of the Classic Pin-Ups.

Every aspect of Bettie’s personality and life captured the determination and enthusiasm of thousands of fans that went along with her till her disappearance. She came with a freshness kind of fame that has never been seen in any modeling industry.

In her own ways, Bettie Page was exotic, daring and very shy at times. Page managed to cover hundreds of magazines even without elaborative costumes. Her tanned eyes and ever blazing black hair were enough to whisper a word to everyone.

On 22 April 1923, Bettie Page was born in Nashville, Tennessee, United States. She was the middle child of Edna Mae and Roy Page. She spent her childhood days with her family, but they didn’t have a stable place to call home. Her family always traveled from one end to the next in search of a safe place to live. Age didn’t count for Bettie since she used to work to care for her siblings and helping her mother with home duties.

Her parents divorced due to lack of trust as well as quarreling every day. The outcome worsened their financial goals. Her mother, Edna worked hard as a hairdresser just to support her family. At the age of ten, Bettie was taken to an orphanage with her mother together with her two sisters. Edna opted to work as she saved some money in between. In her teenage life, Bettie and her siblings loved to play with makeup as well as imitating different hairstyles.

In her later life, Bettie once joined a community center when she learned to sew and cook. It was an important skill for her since she used to make her own costumes and bikinis. It is the same place that she studied and did homework away from home. Her determination and hard work gave her a chance to top in her class.

Being a student, she joined Drama Club and was also chosen as the secretary of the Student Council. Afterward, she won a scholarship and went to Peabody College where she majored in education while still dreaming of becoming a remarkable actress in the future.

On February 1943, Bettie Page and her long-term boyfriend, Billy Neal married. She later earned a Bachelor of Arts degree and went to live in San Francisco with her husband. It was there that she managed to land her first modeling job by marketing fur coats.

In her later years, Bettie Page traveled from one country to the next. That is where she realized that she loved everything that dealt with culture and country. In the mid of 1947, Bettie and Billy got a divorce, and she went to New York. She later met with Jerry Tibbs in 1950 who was interested in photography themes. He took a chance and took hundreds of Bettie’s pictures. The photos were molded together with a pinup portfolio.

Little did Page know that her success was near. Tibbs took a chance to introduce her to lots of photographers who started organizing photographic sessions with her. Of course, Bettie took it as an opportunity to fly high. In a period of one month, her modeling career started to pay off. She began to pose for magazines and clubs such as Titter, Beauty Parade Wink among others. Her title and photographs were later published in more than ten magazines.

Since then Bettie Page became the talk of the town and starred beyond her expectations. In 1955, Page was given a ‘Miss Pinup Girl of the World’ title. The same year she was also named as the ‘Girl with the Perfect Figure.' Her photographs appeared in every scene and cover.

In 1953, Page went to audition at the Sea Cliff Summer Theatre and sharpened her acting career. With her tutor, Berghoff inspiration, Bettie appeared in countable roles such as Jackie Gleason show, Time is a Thief and Sunday Costs Five Pesos. Bettie later went to Florida in 1957 where she majored in her modeling career.

From 1980 to 1990, Bettie Page re-surfaced again as a pin-up model. The media and fans were fascinated by her disappearance that other comic books started to feature her character. Artists such as Dave Stevens and Robber Blue weren’t left behind. They tremendously elaborated her powerful image in the best way possible.

In the mid of 1958, Bettie Page married Armond Walterson, but they later divorced in 1963. She later married Harry, a commitment that made them to part ways. Bettie Page hated to face the public and answer questions. Throughout her modeling life, she always craved for her own time and relaxation. It was complex for her to define her past career.

In reality, Bettie hated interviews. Probably that’s why she vanished without informing even her friends. After her modeling time had passed, she once teamed up with Bill Graham and became and evangelist at heart.

On December 6, 2008, Page was hospitalized due to stroke illness. On 11th December 2008, Bettie Page died, and the funeral was held at Westwood Village Memorial Park Cemetery. It is not true that legends live for a short period. The dark-haired lady as she was known will remain to be a living legend and a modern icon as well as the ideogram of beauty. In the heart of her treasured fans, Bettie Page will forever be placed in the queen of pin-ups category.