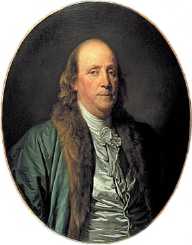 Benjamin Franklin has written and published more inspirational books but one of his adage collections caught my eye “The Way to Wealth”. Benjamin Franklin believed that people always run in debt due to lack of wisdom. He stated that “Debt will never come to promote wealth, or ease your current pain”. In fact it brings more pain and misfortunes.

Despite his love for writing, Benjamin Franklin also known as Ben Franklin helped to draft the declaration of independence. It is a well-reserved document in the US history. It is whereby the thirteen British colonies joined up to overrule their motherland.

In other words, it is the founding document of the America political tradition. Benjamin was also a delegate to the constitutional convention. Not to mention he took a crucial part in science development. He understood the field of electricity in the palm of his hands.

Ben Franklin was born on 17th January 1706 in Boston, Massachusetts. His father, Josiah Franklin, made candles and soaps in one of the decent artisan crafts. Being the youngest son, he was privileged, thanks to his sharp mind. He learned to talk and read at a very tender age. Therefore he went to Boston Latin School, but his formal education ended at the age of ten.

At the age of twelve, he was employed by his brother James as a printer. He mastered everything but didn’t give up reading and writing. But he wasn’t able to get that one chance to get back to school. That is where he decided on learning by himself.

His first goal was to publish more than one poetry book with his quality; he gave up on the way. Reason: Benjamin Franklin didn’t have much professionalism and any writing competency. To him, that was a daunting matter. He went along and discovered a volume featuring essays by Joseph Addison and Sir Richard Steele. He saw this as an opportunity to improve his writing level. He spared some time and read the books over a million times, copied and recopied them while still memorizing each line. He later realized that writing was such an unknown talent, but it attracted more attention. “Prose writing” is my course of life. He recalled the statement in his Autobiography.

From 1757 to 1774 Benjamin Franklin spent his life in London where he took part as a colonial representative. He represented New Jersey, Pennsylvania, Georgia, and Massachusetts. His effort to harmonize the British government proved fruitless. As he planned to return to America, the war of independence had already started, and he permanently accepted to struggle. That is when he drafted the declaration of independence in 1776.

Nevertheless, his outlawed son William, who was the royal governed of New Jersey between 1762 and 1776, remained faithful to Britain. This caused a rift between the two. Later Benjamin Franklin was appointed to represent America in France. He was able to bring back both states at their reconciliation level.

In 1783, Franklin was still an American ambassador to France. He obliged to sign the Treaty of Paris. The process helped to end the American War of independence. That is how he attained high accolade both in France and America. Later in 1785 he returned to America and continued to help in drafting the constitution.

By 1748, Benjamin Franklin managed to settle enough money and retired from his business. His motive was to concentrate more on what he loved - inventing and science. He invented Franklin stove as well as the lightning rod. He explained that electricity and lighting are similar according to his famously known kite experiment. He also came up with Bifocals; a pair of two-part lenses, Carriage Odometer; a device that indicated the distance traveled by automobile. Not to mention Glass Armonica; a musical instrument that made sound by a row of rotating.

Not only did he invent magnificent things, but he also continued with his political regime. In 1736 to 1751 he obtained a favor of being a Pennsylvania Assembly clerk. In 1764 he became a member of the Assembly. In 1753 to 1774 he was positioned as the deputy postmaster for the colonies. He was also counted in as a founder of the American Philosophical Society and a subscription librarian in 1751. It was an academy which later changed into a University of Pennsylvania.

The Founding Father Benjamin Franklin rarely visited a classroom for most of his life. But this did not overtake him to pursue his dreams. Being an employee at the age of 12, he managed to save a little and purchased books. He didn’t mind the lack food, as far as he could hold on to his new volumes, he was okay.

Above all, he came to found his school in Pennsylvania. When still living in London in 1768, Benjamin Franklin managed to add six new letters to the phonic alphabets thus X Y, WQ, and J and C. With all the good life that he lived and hearts that he touched, Franklin died on 17 April 1790 AD in Philadelphia, Pennsylvania.