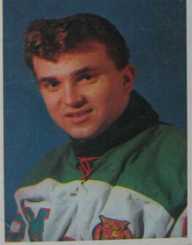 Registered as Bengt Olov Emanuel Gustafsson, better known as Bengt “Julle” (pronounced as You) Gustavsson, was born on 13 of January 1928 in Ringarum.

Bengt Gustavsson started playing the year before for his hometown club Gusum. He was recruited in 1947, becoming a midfielder in soccer for IFK Norrköping. He was initially a wing half under coach Lajos Czeizler.

Bengt Gustavsson was made a defender by Karl Adamek, who was the coach circa 1950. Since then, Bengt played in defense, helping IFK Norrköping win the Swedish championship for three years: 1948, 1952 and 1956.

He was in the Swedish national team in 1951, making a debut by playing against Denmark in October that year, the team had lost to Denmark. In 1952, Bengt Gustavsson was chosen to be part of the Swedish Olympic football team.

Even though the team lost in the semifinals to Hungary, ending up in third place, Bengt won the Guldbollen Bengtsson (Golden Ball) as footballer of the year in 1953.

Bengt moved to Italy, joining first division Atalanta Bergamo in 1956, where he remained in defense for the Italian Serie A. In 1958/ 60 seasons, Atalanta dropped into Serie B but returned to Serie A under Karl Adamek.

Bengt was also part of the World Cup Team in 1958; he played for Sweden under IFK Norrköping. During the World Cup final, they played against Brazil’s Pelé, where they won silver in the championship.

He returned to Sweden, playing for Åtvidabergs FF for the 1960 season. Bengt Gustavsson was the manager for the club from 1964 for a year, but later he became the coach for the same football club. Under him, the team won their first trophy in 1970, earning four consecutive wins until 1973. He was also recruited as the coach for the Swedish Youth National Team during 1971, for a year.

After Åtvidabergs FF, Bengt was a coach at various football clubs, including Östers IF, Hammarby IF and IK Sleipner. Bengt became an assistant coach for IFK Norrkoping for a few times.

Bengt Gustavsson was player of the year in 1953.

Bengt Gustavsson passed away on 16 February 2017; he was eighty-nine years old.