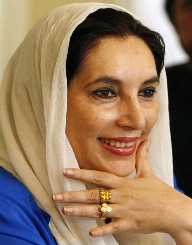 Benazir Bhutto was born on June 21, 1953, in Karachi, Pakistan. Her father was Zulfikar Ali Bhutto, and her mother was Nusrat Bhutto. She also had several siblings.

As a youth, Benazir Bhutto completed her elementary and high school education in Pakistan.

For her postsecondary education, Bhutto moved to the United States to attend Radcliffe College at Harvard University. Benazir Bhutto stayed here until she graduated with a bachelor’s degree in 1973.

After graduating from Harvard, Bhutto moved to England. While here, she studied at Oxford. She stayed here until 1977. While there, she was the president of the Oxford Union.

Benazir Bhutto returned to Pakistan in 1977. However, she and the rest of her family were soon placed under house arrest. At the time, her father was the Prime Minister of Pakistan, but while the family was under house arrest, he lost his leadership role. Because of this, Bhutto became the new leader of the Pakistan People’s Party, which her father had formerly been the leader of.

Bhutto’s transition to try to gain power did not go smoothly. In 1979, her father was hanged, and she was arrested. He stayed in prison for several years before she was allowed to leave the country to gain medical assistance. Her other family members went with her. Once she was healthy again, she resumed her mission to become the leader of Pakistan.

Benazir Bhutto had to do the majority of her early efforts to gain power from outside of Pakistan. She imposed an exile on herself, and it wasn’t until 1986 that she finally returned to Pakistan. By this time, Pakistan was getting ready to hold open elections. However, it wasn’t until 1988 that Benazir Bhutto was ready to run, as General Haq, an important politician at the time, had recently died.

During the 1988 election, Bhutto’s political party won the most seats in the National Assembly. Later that year, Bhutto was elected as the new Prime Minister of Pakistan.

Bhutto’s time as Prime Minister as rough at first. The President of Pakistan, Ghulam Ishaq Khan, worked against many of Bhutto’s ideas for reforms. Benazir Bhutto wanted to improve educational standards in the country, reduce poverty reduce crime and boost the economy. While none of these ideas were bad, the President was extremely conservative, and likely did not like the idea of a woman being the Prime Minister.

Since not much progress was made during Bhutto’s time as Prime Minister, and since any politicians were against her leadership, charges of corruption were drawn up against her. By 1990, she was no longer the Prime Minister. Benazir Bhutto was then succeeded by Nawaz Sharif.  Bhutto then became the Leader of Opposition.

Sharif stayed at his post of Prime Minister until his resignation in 1993. After this, new elections were held to find a new Prime Minister. Once again, Bhutto’s political party won the election. Benazir Bhutto was then made the Prime Minister of Pakistan again. The new President of Pakistan was Farooq Leghari.

During her second term as Prime Minister, she continued to fail to make any political reforms. Racial tension, a lack of women’s rights, and the exercising of strict laws made things worse in the country. This gave her a terrible approval rating. Besides from not following through on her promises, many people still did not like having a woman for their Prime Minister. She was later found to be uncredible and dismissed from her role as the Prime Minister again.

After losing her position as Prime Minister, she became the Leader of the Opposition. Benazir Bhutto was also in exile again until 1999. Around this time, Pakistan was involved in the Kargil War. While the country was distracted, Bhutto tried to rally support for herself. She also tried to raise the status and prestige of her political party again. However, this did not work.

In 2002, it was made illegal for Prime Ministers to serve more than two terms. Because of this, it would be impossible for Benazir Bhutto to become Prime Minister again.

In 2007, Benazir Bhutto came out of exile and returned to Pakistan. She began running for a new political position, but she died before the election.

Benazir Bhutto married Asif Ali Zardari in 1987. Together, the couple had three children.

Benazir Bhutto died on December 27, 2007, in Rawalpindi, Pakistan. The cause of her death was assassination. Her killer is still unknown. She was 54 years old when she passed away.