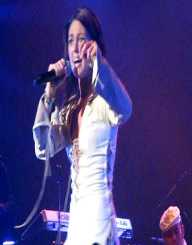 Maria Isabel Pérez Cerezo was born on the 29 January 1976 in Belgium. Her parents are Spanish speaking, and Belle grew up bilingual in the town of Hamont-Achel (pop.14,000) in the Belgian Province of Limburg. She was educated at a Catholic school and taught by nuns.

Belle  Perez was exposed to music at a young age. At a young age, she was soon singing in flamenco bands and getting involved in talent shows. Patrick Reiner spotted Perez at a talent show in 1997 when she was twenty-one. In 1999, Perez auditioned for Eurosong, the Belgian pre-selection for the Eurovision contest. She missed out on the Eurovision, but she was noticed. Perez recorded two albums, and they were well received. By 2004, she was co-hosting a favorite show in the Netherlands, Tros Muziekfeest. She performed in various concerts, and her popularity was increasing.

Then her big break came with the release of her third album, Baila Perez. Changing from pop and adding a more latino flavor gave her music a more authentic sound. Her fans loved the change to latino. The album generated some big hits including Que Viva la Vida, Enamorada and Ave Maria.

Belle  Perez started dating Mario Winters in 1995. In 2000, Perez and Winters were married in secret. Married. They separated in 2008. She was later in a relationship with Wouter van der Horst.