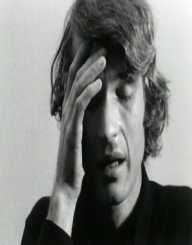 Bas Jan Ader was born 19th April 1942, to Bastiaan Ader and Johanna Ader-Appels. He was born in Winschoten, Netherlands, and his parents were both ministers of the Calvinist church, which was a break-away from the Catholic church. Ader was only two when his father was killed by the Nazis because he helped Jewish people escape the Holocaust.

Bas Jan Ader participated in art classes at Gerrit Rietveld Academy in Amsterdam, and after that took part in a study-abroad program which took him to the U.S. He graduated from Otis College of Art and Design in 1965 with his Bachelor of Fine Arts, and then from Claremont Graduate University in 1967 with his Master of Fine Arts.

graduation, Bas Jan Ader began teaching. His appointments were at schools such as Mt. San Antonio College, Immaculate Heart College, and the University of California in Irvine.

had begun exhibiting his works as early as 1961, in three galleries in Washington, D.C. His work was received well, and he became an overnight sensation with the publicity.

As well as his photography,Bas Jan Ader did some short black and white films in which he was the only one acting. The films were very artistic and included things like sitting on a chair on a pitched roof until he fell, and there was another in which he hung on a branch until he fell into a stream.

He tied his films together with his photography. One of Ader’s most well-known works is I’m Too Sad To Tell You. In this work, he has photographs of himself, a short three-minute movie of himself crying, and then he also sent cards to his friends which had the words, “I’m too sad to tell you” inscribed on them.

Bas Jan Ader also published a magazine in 1969-70 with Leavitt. It was done anonymously, and took a satirical look at conceptual art. They interviewed nonexistent artists amongst other things.

In July 1975, Bas Jan Ader boarded his 13-foot boat named Ocean Wave, with the aim of sailing solo from west to east across the North Atlantic. He disappeared during his trip. His boat was found nine months after his departure, south-west of Ireland.

The cause of his death or disappearance is unknown, but has, as most of these incidents do, caused much speculation. Bas Ader’s work has been exhibited at several solo exhibitions all over the world since his disappearance, including Germany, France, and Mexico.