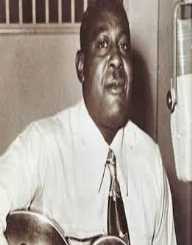 American blues artist Arthur Crudup was born on the 24 August 1905 on his grandparent’s land in Forest in the Mississippi Delta region.

Arthur Crudup was exposed to church music as a child. He was an adult before he began playing the guitar and was tutored by Papa Harvey, a blues musician. During the early 1940s, Crudup took to playing on the streets of Chicago and was discovered by Lester Melrose, a blues fan and RCA/Bluebird music producer. Melrose hired Crudup to play at a party at the home of Tampa Red, where he was introduced to various blues artists including Lonnie Johnson and Lili Green.

From the early 1940s, Arthur Crudup began recording with Victor Records, and soon his songs were covered by various artists including B.B. King. Crudup built up a reputation as a singer-songwriter while at the same time having to do multiple jobs to make a living and support himself and his family. In 1954, Elvis Presley, who was working as a truck driver at the time, recorded a demo track of That’s All Right Mama which Crudup had written in 1947.

Others artists who have recorded Arthur Crudup's songs over the years include Rod Stewart and John Mellencamp. His music also inspired many artists including Led Zeppelin, Slade, Eric Clapton, Elton John, and The Beatles. From the mid-1950s until the early 1960s, Crudup went relatively unnoticed until he recorded an album of in 1962. At that time he was working on the land as a labourer to support himself.

Then from the mid-1960s, he began playing at blues festivals and various clubs and concerts where he won a new generation of fans with his blues music. In later years, he worked with the American singer and musician Bonnie Raitt. Albums include Mean Ol’ Frisco (1962), Crudup’s Mood (1969), Look on Yonder’s Wall (1969) and Roebuck Man (1974).

Arthur Crudup was nicknamed  The Father of Rock ‘n’ Roll. He was praised by many successful artists including Bonnie Raitt and Elvis Presley. He was the author of Elvis Presley’s first big hit. That’s All Right Mama (1954).

Arthur Crudup had three sons, James, George, and Jonas who were all musicians; they played in the Crudup Brothers. They released one album, Franktown Blues (2000). Arthur Crudup died on the 28 March 1974 in Virginia.  After his death, his estate managed to negotiate copyright compensation and overdue royalties.