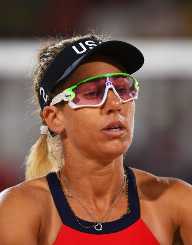 April Ross is an American beach volleyball player. Born on June 20, 1982, she has competed in several international games alongside her partner Jennifer Kessy. In 2012, the partners won a silver medal at the Summer Olympic Games.

April Ross was born on June 20, 1982, and raised in Newport Beach, California. She received education at the Newport Harbour High School where she learned, tracks events, volleyball, and basketball. With the height of 6 ft, 1 in (1.85 m) tall she became a prolific volleyball player. April Ross participated in many competitions and won a lot of laurels including the Gatorade National Player of the Year and two-time winner of the California Interscholastic Federation Player of the Year in 1998 and 1999. As a star volleyball player in her graduating class, she became the country’s top recruit after school.

For five years, April Ross played club volleyball for Orange County Volleyball Club. During this period, she was also a member of the U.S. Junior National Team.

After graduating from Newport Harbour High School, April Ross enrolled at the University of Southern California (USC), Los Angeles in 2000. While there, she continued with her volleyball glories by winning the national Freshman of the Year and Pac-10 Freshman of the Year during her first year. She was a member of the USC team that went to the NCAA Final Four during her freshman.

April Ross continued with her performance in her sophomore becoming a second-team-America and ranked fourth in Pac-10 at the end of the season. She also contributed to the NCAA Regional Finals. However, a sprained ankle during game two forced her to leave the match. She was named a First Team All-American in 2002. She would help USC win the NCAA title in 2002 and 2003 beating Stanford and Florida respectively. At the end of her college career, she was ranked 6th in eight statistical categories becoming one of the University of Southern California’s all-time career record-holders.

April Ross started her professional beach volleyball career competing in various events with partner Jennifer Kessy. They participated in multiple competitions in 2008 during the Swatch FIVB World Tour. They were third at the ConocoPhillips Grand Slam Stavanger, second at the Dubai Open and took the first place at the Phuket Thailand Open. She was adjudged the Most Outstanding Player during the last competition. They competed in the AVP tournament in Santa Barbara, California beating the World No. 1 duo Kerri Walsh and Misty May-Treanor on September 7, 2008. They went on to win the FIVB World Championships in Stavanger, Norway by beating Brazilians Juliana Felisberta Silva and Larissa Franca in the finals on July 4, 2009.

April Ross and her partner Jennifer Kessy competed in the 2012 London Olympic Games where they won silver medal by defeating Marissa França Maestrini and Juliana Felisberta da Silva from Brazil in the semi-finals after dropping the first set. However, in the final match, they lost to Misty May-Treanor and Kerri Walsh-Jennings in a straight set score of 16-21. Before the preparation towards the 2016 Olympics in Rio de Janeiro, she teamed up with Walse-Jennings on June 26, 2013, to train.

During a semi-final in the main event, April Ross and Walsh-Jennings then seeded at number 3 lost to the Brazil second seed team of ÁgathaBednarczuk and Bárbara Seixas de Freitas in straight sets of 20-22 and 18-21. They, however, defeated the Brazil number 1 seed team of Larissa França Maestrini and Talita Antunes da Rocha to win a bronze medal.

In 2010, April Ross married Brad Keenan, who also is a beach volleyball player.