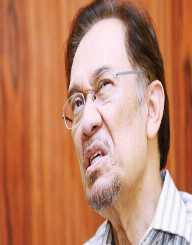 Anwar Ibrahim was born on August 10th, in 1947. Ibrahim is a Malaysian politician who is famous for being the former Leader of the Opposition. He is also one of the founders of People's Justice Party. This party advocated for anticorruption and emphasized mostly on social justice in the society. Ibrahim’s political career is also credited with the fact that he became the Deputy Prime Minister of Malaysia-1993 in 1998. In addition to this, he was also the Finance Minister for seven years from 1991 to 1998.

Anwar Ibrahim was born on August 10th, 1947. His place of birth was in Cherok Tok Kun, in Bukit Mertajam. His father, Ibrahim Abdul Rahman worked as a professional porter. On the other hand, Che Yan was merely a housewife but was actively involved in politics. Ibrahim’s father was also a politician that served as one of the UMNO Member of Parliament for a Malaysian district (Central Seberang Perai District) from 1959 to 1969. At some point, he also worked in the health ministry as a Parliamentary

Ibrahim enrolled for his secondary education at Malay College Kuala Kangsar and after went to the university at the University of Malaya. He also pursued his masters while serving time in prison in 1974 to 1975. He schooled at the National University of Malaysia.

Ibrahim interest in politics developed right from the time he was young. When he was at the University of Malaya, he was the student leader for the National Union of Malaysian Muslim Students. Within this period, he was also elected as the head of University of Malaya Malay Language Society. Responsibilities were lying on his shoulder as he went on to become the co-founder of Muslim Youth Movement of Malaysia a year later.

In 1974, Ibrahim found himself behind bars for being among the students that were opposing rural poverty. Due to stringent Malaysian laws, he stayed behind bars for close to two years. In the period between 1975 to 1982, Ibrahim was elected to serve as the Asia Pacific spokesman in World Assembly of Muslim Youth.

In 1982, Anwar Ibrahim made a shocking move by joining the United Malays National Organisation- UMNO. During this time, the party was headed by Mahathir bin Mohamad. He took over as the prime minister in 1981. Ibrahim political career moved up the ranks quickly as he first became the Minister of Culture. In 1983, he took over as the Minister of Youth and Sports. In 1984 and 1986, he headed the ministry of agriculture and education respectively. His major impact to Malaysia came in 1991 after being elected the Minister of Finance. It is through the policies that Ibrahim formulated which led to the rising economic growth of the nation. Around this time, he was also serving as the Deputy Prime Minister. In 1998, he was chosen to stand as the World Bank’s Development Committee Chairman. This was a post that he held for a few months until September the same year. Within this period, he was also serving as the chairman of International

In 1993, Ibrahim had won to stand for the post of the deputy prime minister to Mahathir. This was after defeating Ghafar Baba in the race for Deputy President of UMNO. In 1997, when Mahathir had gone for a two month holiday, he appointed Ibrahim as the acting prime minister for that period.

While serving as the Prime Minister from 1993 to 1998, Anwar Ibrahim formulated policies that helped in stabilizing the Malaysian economy. His efforts in bringing social equity have greatly been appreciated.