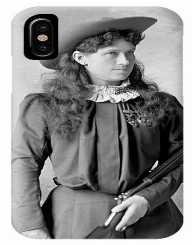 Born Phoebe Ann Mosey, Annie Oakley was an American sharpshooter and exhibition shooter born on August 13, 1860. As a crusader for women empowerment, Annie Oakley proposed women serve in war and the need for women to know how to use guns. This to her would create an empowering image for women. Annie Oakley was also a staunch activist for the independence and proper education for women. Annie Oakley was a very talented shooter and rose to fame when she won a shooting match against traveling-show expert shooter Frank E. Butler at age 15. Her spectacular skills gained her prominence and had the opportunity to perform before heads of states and royalty. She was also part of the Buffalo Bill’s Wild West with Frank E. Butler, who later became her husband.

Annie Oakley was born on August 13, 1860, in a cabin in Woodland, Darke County, Ohio. She was born to Susan Wise and Jacob Mosey and was the sixth born of her father but ninth of her mother. Annie Oakley grew up in Patterson Township, Darke County, Ohio. Both parents were of English descent. Her father died of pneumonia in1966 plunging the family into poverty. Annie who was in school then had to break for a while to continue later. She was admitted to the Drake County Infirmary at age nine along with her elder sister. There she was put in the care of the superintendent.

To raise money for her education, Annie Oakley in 1970 decided to lend hands to a family who needed for their child and other home chores. However, there was a twist in turn as she was abused and endured a condition which was virtual slavery for two years. She later in 1972 escaped from the family and made it back home when she was 15. Annie had previously at around age eight learned how to shoot and hunt to support her family. This paid off for Annie as she was able to raise enough money for the family and also paid for a mortgage on her mother’s farm.

Annie Oakley debut in the shooting has always had conflicting dates. Some place the day on 1875 and others have disputed the year saying it was instead in 1881. Whatever it may be, she contended in the Baughman & Butler shooting act held in Cincinnati. In the event, the travelling show marksman Frank E. Butler placed a $100 with a Cincinnati hotel owner Jack Frost that he could beat any other shooter in the locality. Jack then presented Annie to challenge Butler, and she eventually defeated him. The two married later in 1881.

After their challenge in the Cincinnati shooting event and subsequent marriage, they lived together in Cincinnati and performed together. It was her partnership with Butler that she picked the stage name, Butler. The couple in 1885 joined the Buffalo Bill’s Wild West where Annie Oakley was nicknamed Watanya Cicilia by another performer Sitting Bull. As skillful as she was and her excellent eagle eye shooting skill, she met a fierce challenge from Lillian Smith during her debut in the Buffalo Bill.

After two years in the show, Annie Oakley went into hiatus and returned in 1889. This time her fiercely contender Smith had left for Paris Exposition in 1889. Her return in the Buffalo Bill marked her great years to become the first American female shooting star. She also became the highest earner as compared to other performers. The purse became even more significant as she performed in other shows for extra income.

Oakley frequently toured in other countries to perform. She performed for royalties like Queen Victoria in the United Kingdom, King Umberto I of Italy and the France President, Marie François Sadi Carnot, and other prominent figures. It was even speculated that upon request Oakley was able to shoot the ashes of a cigarette held by Kaiser Wilhelm II of Germany. She retired from the Buffalo Bill show in 1902.

Annie Oakley always believed that women could achieve more if given the opportunity. She was still optimistic about the prowess of an empowered and educated woman. With her belief, she always promoted the use of women in combat operations in the United States Armed Forces. To this effect, she wrote to the then U.S President William McKinley on April 5, 1898, to offer 50 sharpshooters to the government it the country went to war in Spain, but the offer was declined. Three years on, Oakley was involved in a train accident and was temporarily paralysed. By five spinal surgeries, she recovered steadily. Due to this, she left the Buffalo Bill Show in 1902.

About 15,000 women are believed to have been taught how to shoot by Annie Oakley during her career. She always held the view that if women are taught how to shoot it boosts their confidence and also serve as a self-defense mechanism. After retiring from shooting, she did some acting work and played Nancy Berry in The Western Girl. She also acted in the film The Little Sure Shot of the Wild West in 1894. She later returned to her shooting career and made several records and then retired in 1924 at age 64. She had previously in 1922 contested in a shooting event in Pinehurst, Carolina, where she hit 100 clay targets in a row from 15m.

Annie Oakley was married to Frank E. Butler on June 20, 1882, according to date at the registry. They met during a Cincinnati shooting event. The couple had no children. Oakley and her husband suffered a severe accident in 1922 which affected her legs and therefore the need to wear a steel brace on her leg. Three years on, her health deteriorated, and on November 3, 1926, she died of pernicious anemia in Greenville at age 66. She was cremated in Cincinnati and ashes buried at the Brock Cemetery, Greenville, Ohio.