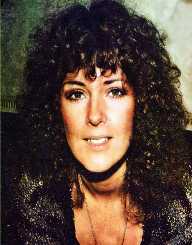 ABBA member Anni-Frid Lyngstad was born in Norway on the 15 November 1945 Ballangen, Norway to Synni Lyngstad and Alfred Haase.  Her mother was Norwegian and had an affair with a German Army sergeant who was already married and who returned to Germany when the war ended.

To escape the animosity the children of German soldiers experienced in Norway, Lyngstad's mother and grandmother relocated to Sweden. Shortly afterwards, her mother died, and Lyngstad was raised by her maternal grandmother. Lyngstad believed that her father had died at sea when his ship went down but in the 1970s, she met her biological father in Switzerland. She later said that she had felt very little connection or love for him.

Anni-Frid Lyngstad showed singing ability as a preteen and began appearing at charity events and concerts. At 13, she was singing for a dance band, and continued singing and performing throughout her teens. In September 1967, she entered a talent competition New Faces which was run by EMI Music Sweden. She won the contest and gained national exposure but had no real success until she met the other three members of ABBA.

In 1969, Anni-Frid Lyngstad met Benny Anderson, and along with Bjorn Ulvaeus Agathagetha Faitskog, they formed a quarter called Festfolk. After they began recording, they had a Swedish hit with People Need Love. They changed their name to ABBA, signifying their initials. Under the name ABBA, they represented Sweden at the 1974 Eurovision Song Contest singing Waterloo and won the competition.

Waterloo became a massive hit in the US, UK and elsewhere. During the rest of the 1970s, ABBA produced hit after hit and built an enormous following worldwide. Songs included Mamma Mia, SOD, Knowing Me, Knowing You; Dancing Queen and Money, Money Money. ABBA toured widely, and the foursome was treated as superstars around the world including the US, Australia, France, and Asia. ABBA disbanded in 1982.

After the breakup of ABBA, Anni-Frid Lyngstad pursued a solo career. Her solo albums include Frida (1971), Frida ensam (1975), Djupa andetag (1996), Something’s Going on (1982) and Shine (1984). She assisted in the opening of ABBA: The Museum in Stockholm, Sweden (2013). In 2015, she sang a duet with Dan Daniell entitled 1865, a single concerning the Matterhorn. In 2018, she sang a duet of Andante with Arturo Sandoval which was recorded for his Ultimate Duets album.

Anni-Frid Lyngstad first husband was Ragnar Fredriksson (m.1964-div.1970).  She then married Andersson in 1978, but the marriage only lasted four years before they divorced in 1981. Her third husband was Prince Ruzzo Reuss von Plauen (m.1992-his death 1999). When Ruzzo died of Lymphoma in 1999, Lyngstad became the Dowager Princess of Reuss.

She has been in a long-term relationship with British aristocrat Henry Smith, the 5th Vicount of Hambleden. She had two children with Fredriksson: Hans Ragnar (b.1963) and Ann Lise-Lotte (b.1967-d.1998). Her daughter was involved in a motor accident and died age 30.