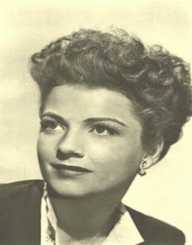 Anne Baxter was an American actress best known for the films Razor’s Edge and All About Eve.

Anne Baxter was born on 7 May 1923 in Michigan City, Indiana. Her parents were Catherine Doherty and Kenneth Baxter. Baxter began acting at school and was determined to be an actress from the age of ten. When she was six, Baxter moved with her family to New York City. It was upon viewing a play on Broadway that she decided to become an actress. Baxter was educated in an all-girls private school in Manhattan, Brearley School.

Anne Baxter had been acting since the age of five, but her first professional debut came when she was thirteen years old. She appeared in the Broadway production Seen but Not Heard. She was cast to play a part alongside Katherine Hepburn in another Broadway show, Philadelphia Story, but Hepburn had her dropped from the production.

At age sixteen Baxter began to seek work in film, following her disappointment in theatre. She was signed to the 20th Century Fox studio and made her film debut in the 1940 film, 20 Mule. Baxter was explicitly chosen by famed director Orson Welles for a part in his movie The Magnificent Ambersons. In 1946, Baxter gave her most famous performance in Razor’s Edge. Baxter would later claim it was her only significant performance. She won the Academy Award for Best Supporting Actress for her role in Razor’s Edge.

In 1948, Anne Baxter appeared alongside Gregory Peck in the western, Yellow Sky. 1950 saw Baxter take the title role in the film All About Eve. She received high praise for her performance as Eve Harrington. Despite this 20th Century Fox would loan out Baxter to other studios rather than give her starring roles. Baxter appeared in the Alfred Hitchcock directed I Confess, while loaned out to Warner Brothers studio.

Anne Baxter played Queen Nefretiri in the biblical epic, The Ten Commandments. The film was for Paramount Pictures and starred Yul Brynner and Charlton Heston. Baxter received praise for her performance although the character Nefretiri was primarily disliked. Baxter appeared on television more in the later period of career; she also made a return to the stage.

Baxter made four appearances in the 1960s Batman series and appeared in the crime drama Ironsides. Baxter’s Broadway return was in a musical remake of the film All About Eve, titled Applause. Baxter appeared alongside James Stewart and Kurt Russel in the 1971 film, Fool’s Paradise. Baxter replaced Bette Davis in Hotel, a television series. Baxter’s last role came in the made for television film Masks of Death. Masks of Death was a British production and was aired on Channel 4 in 1984.

Anne Baxter was married three times. Her first marriage was to John Hodiak, an actor. They married in 1946 and had a daughter, Katrina, together. The couple divorced in 1953. Baxter married for the second time in 1960. Her second husband was Randolph Galt with whom she had two children, Melissa and Maginel. Baxter divorced Galt in 1969. Baxter married a stockbroker, David Klee, in 1977. Klee died only nine months after their marriage.

Baxter suffered a brain aneurysm in December 1985. She was kept on life support for eight days before her family decided to let her die. Baxter died on 12 December 1985.