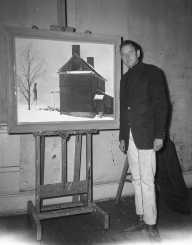 Andrew Newell Wyeth was an American realist painter who chiefly adopted the regionalist list. Born on July 12, 1917, he was one of the famous US artists of the mid-20th century. His career lasted for more than seven decades. His favourite theme for most of his works were people around him and landscapes of his hometown Chadds Ford, Pennsylvania and summer home in Cushing, Maine. His famous works include the painting Christina’s World, which is currently at the Museum of Modern Art in New York City.

Andrew Wyeth was born on July 12, 1917, in Chadds Ford. He was the last child of five by artist and illustrator N.C. Wyeth and Carolyn Bockius Wyeth. His siblings were Henriette Wyeth Hurd, Carolyn, Nathaniel Wyeth, and Ann, all of whom became successful in their own right. Growing up as a frail child, young Wyeth was homeschooled. As a child, he took a strong interest in reading with works of Henry David Thoreau and Robert Frost being his favourite.

Andrew Wyeth also loved music and movies and later claimed King Vidor’s The Big Parade had a strong influence on his artistic works watching it 140 times. He would then collaborate with Vidor for the documentary, Metaphor, in which Wyeth highlighted how the film influenced his works like Winter 1946, Portrait of Ralph Kline and Afternoon Flight of a Boy up a Tree and Flurries.

Under the guidance of his father, Andrew Wyeth started drawing at a very young age. He began drawing before he could read. Growing up, he joined his father in his studio, where he gave him his only art lessons. He learned figure study and watercolour from his father and egg tempera from Peter Hurd, his brother-in-law. He self-taught art history with great appreciation to masters of Renaissance and American Paintings. His father and nephew Newell Convers Wyeth II died on October 1945, when their car delayed on a rail track and was struck by a train.

Andrew Wyeth developed to become a visual artist and was primarily regarded as a realist painter. However, Wyeth saw himself as an abstractionist. His favourite themes were the environment and people around him with a strong passion for land and sea. He had his debut solo exhibition of watercolours at the Macbeth Gallery in New York City in 1937. It was very successful with all his painting sold out. His famous works include Christina’s World, 1948, Kuerner Farm, and the Helga paintings. His other works include Coot Hunters, 1933, Public Sale, 1943, Winter 1946, Adam, 1963, Brown Swiss, Night Sleeper, 1979 and Garret Room among several others.

Andrew Wyeth married Betsy James in 1940, after meeting her in Maine in 1939. They had two children Nicholas and James (Jamie), who also became an artist. Wyeth died at age 91 on January 16, 2009, in his sleep in Chadds Fort Pennsylvania.

Andrew Wyeth received several awards and honours including National Medal of Arts, 2007, the Congressional Gold Medal, 1988, D.F.A from Bates College in 1987 and elected to the British Royal Academy in 1980, becoming the first American artist to achieve that.