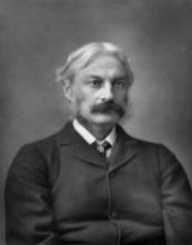 Born on March 31, 1844, Andrew Lang was a prolific Scottish literary critic-poet, novelist, and contributed to the field of anthropology. Andrew Lang became known for his collection of folk and fairy tales. Andrew Lang did a lot of works including The Black Thief. A new and original drama (Adapted from the Irish) in four acts, 1882, The True Story Book, 1893, Prince Ricardo of Pantouflia, 1893, Grass of Parnassus, Rhymes old and new, 1888 and The Arabian Nights' Entertainments, 1898, among several others. The University named the Andrew Lang lecture in his honor.

Andrew Lang was born on March 31, 1844, in Selkirk to John Lang and Jane Plenderleath Sellar. He was the first child of eight others by his parents. Andrew Lang received education from the Selkirk Grammar School, Loretto. Andrew Lang was very proficient academically. After graduating, Andrew Lang enrolled at Balliol College, Oxford graduating with a first class in 1866.

After his graduation, Andrew Lang became a fellow of Merton College and later an honorary follow. During this period, he made a name as one of the most versatile writers as a poet, critic, journalist, and historian. Andrew Lang became known for his classy works in folklore, mythology, and religion. His passion for folklore grew during his early life after Andrew Lang read John Ferguson McLennan and influenced by E.B. Tylor during his Oxford days. His works on folklore and anthropology include, Custom and Myth published in 1884 and also Myth, Ritual, and Religion in 1887. Bearing in mind the 18th-century idea of the noble savage, Andrew Lang came out with Making of Religion, in which the existence of high spiritual ideas of the savage races was maintainedlikening it to the modern interest in occult phenomena in England. In 1889, he came out with Blue Fairy Book an illustration of fairy tales made classic.

Andrew Lang since came out with several other fairy tales, which collectively became, Andrew Lang’s Fairy Books. In Social Origins published in 1903, Andrew Lang explored the origins of totemism. Langs publications on anthropology includeThe Book of Dreams and Ghosts, 1897, Magic and Religion, 1901 and The Secret of the Totem 1905 among several others.

Lang’s works during his earliest writing career were volume of metrical experiments including The Ballads and Lyrics of Old France (1872), Ballades in Blue China, 1880, Ballads and Verses Vain (1884), Rhymes à la Mode, 1884, Grass of Parnassus, 1888, Ban and Arrière Ban, 1894, and New Collected Rhymes, 1905. Lang published several other works. Aside from his writing, Andrew Lang was a journalist and worked for the Daily News and wrote articles for Morning Post.

He also worked with Longman’s Magazine as a literary editor for many years. As an editor, he edited Robert Burns, The Poem and Songs1896, JG Lockhart’s Life and Letter, 1897 and The Life, Letters, and Diaries by Sir Stafford Northcote, 1st Earl of Iddesleigh in1990. Andrew Lang became the president of the Society for Psychical Research in 1911 and was elected to the FBA in 1906.

Andrew Lang died on July 20, 1912, of angina pectoris at the Tor-Na-Coille Hotel in Banchory. He was interred at the cathedral precincts at St Andrew's. He was survived by his wife.