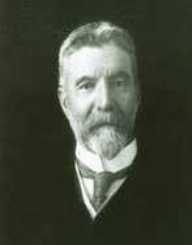 Alfred Deakin was born on 3rd August 1856 to William and Sarah Deakin. His father was English, his mother from Wales, and they emigrated to Australia in 1849. They were originally bound for Sydney, but as Deakin’s father had family in Adelaide, that is where they disembarked.

William Deakin headed to the goldfields in Victoria, and a couple of years later the family followed him. He gave the goldfields away and settled in a suburb of Melbourne known as Fitzroy. He had several jobs over the years, finally ending up a partner for Cobb & Co, a coach business.

Alfred Deakin was a mere four years old when he was sent off to boarding school in a country town of Victoria, and later to South Yarra, another suburb of Melbourne.

In 1864, he became a day student at the Melbourne Church of England Grammar School. He graduated in 1871 with reasonable grades but didn’t really excel. He went on to study law at the University of Melbourne.

As well as being an avid reader, Alfred Deakin often spoke at the University Debating Club, and at the Eclectic Association of Victoria, where members would speak their minds on a range of different intellectual topics.

In 1877, he graduated from his final law exams.

In 1878, Alfred Deakin was introduced to David Syme from the newspaper, The Age in Melbourne. For the next five years, he would be a journalist, writing on topics such as politics and literature.

Alfred Deakin had an interest in politics, which grew as time passed and different political stories took his interest. With Symes helping him, Alfred Deakin became the Liberal candidate for West Bourke, and in 1879 he won the seat. Whilst making his maiden speech, he resigned. He went on to lose the seat in the next by-election. He lost the seat at the following election in 1880, but later the same year, won it again.

In 1901, after Federation, Alfred Deakin was elected to the first federal parliament as the member for Ballarat. He also became Attorney-General.

Alfred Deakin succeeded Barton as Prime Minister in 1903. He resigned in 1904 as he didn’t have a majority government, but resumed the role of Prime Minister again in 1905, which he held for three years.

Alfred Deakin was defeated by the opposition in 1908 but again won government in 1909. He retired from parliament in 1913. He continued to work, but found it progressively more difficult, as he had dementia which caused memory loss. He died in 1919.

In 1886, Alfred Deakin introduced legislation to nationalize water rights and introduced aid on a state level for irrigation works to be done. He started irrigation in Australia for the farmers.

After 1890, Alfred Deakin concentrated on the Federation of Australia, working tirelessly for the cause to bring all the separate colonies together with their own constitution, to become the Commonwealth of Australia. This included traveling to England in 1900 to supervise the bill being passed in parliament.

Deakin’s government set a lot of the policy that shaped Australia and the direction it went in. He was responsible for Australia getting its own currency, the Copyright Act, and for making companies pay fair wages to their workers

Alfred Deakin married Elizabeth Brown, known as Pattie, in 1882. Alfred Deakin was well known in the spiritualist movement, and Pattie was the daughter of another well-known spiritualist. Her parents didn’t approve of the marriage.

Alfred Deakin and Brown lived with his parents while their house was being built in South Yarra. They had three daughters who were named Ivy, Stella, and Vera.

Alfred Deakin was the leader of a group that pushed for Australian federation, which took place in 1901. Federation was when all the separate colonies (now States) came together as a united group to form the Commonwealth of Australia.

He then went on to be the Prime Minister of Australia, not once but three times.

His descendants are still involved in politics today, and the present day Liberal Party consider Deakin one of the founding fathers, not only of the party but of Australia.