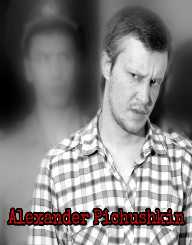 Alexander Yuryevich Pichushkin was born 9th April 1974, in Mytishchi, in the USSR. When he was a child, Pichushkin fell off a swing, which then hit him on the forehead as it swung back. It has been speculated by medical experts that the frontal cortex of his brain was damaged at the time.

Pichushkin was bullied at school, which fed into the hostility that he was increasingly showing. He was transferred to a different school, more equipped to handle children with disabilities.

His grandfather believed the boy to be brilliant and took his grandson in to live with him. He taught Pichushkin how to play chess, and Pichushkin was an extremely talented player. It was a good outlet for his aggression. Not only did he play at home, but he played against the senior men in Bitsa Park.

Alexander Pichushkin's grandfather died which was a significant emotional blow to him, and he had to return home to his mother’s house. He began to drink heavily, with vodka being his drink of choice. He continued to play chess with the other men in Bitsa Park but now joined them with their vodka drinking.

Pichushkin then started carrying a video camera, and when he came into contact with children, he would bully and threaten them while filming it, giving him a sense of power. One particular instance which has been made public, was when he hung a child out a window holding him upside down by one leg, threatening to let him drop 15 meters to his death. He would then repeatedly watch the videos he had filmed until they no longer satisfied him.

Alexander Pichushkin's first known murder was in 1992 while he was still a student. He then started regularly killing from 2001.

He always attacked his victims from behind, so they were taken by surprise. His preferred method of killing was repeated hammer blows to the head. He said he felt like God when he was killing people, and he also stated that life without a murder was like life without food for other people.

Once he was caught, Alexander Pichushkin led the police to many of the murder scenes, most of them at Bitsa Park. The last murder committed by Pichushkin was that of Marina Moskalyova in 2006. She had a metro ticket on her body which enabled the police to view surveillance video, and they saw she was walking with Pichushkin.

Alexander Pichushkin was arrested in June 2006, and he was convicted in October 2007 of 49 murders and three attempted murders. He asked the court to add another 11 victims to the body count, bringing the total of dead to 60. He was given life in prison, with the first 15 years in solitary confinement.

Pichushkin was also known as The Chessboard Killer and The Bitsa Park Maniac.