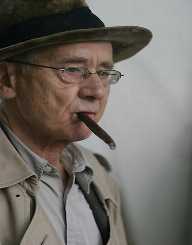 Alan Sillitoe was born on March 4, 1928, in Nottingham, Nottinghamshire, England. His parents Christopher and Sabina were both working-class citizens. His father worked at the Raleigh Bicycle Company factory. His father was illiterate and unsteady with his jobs. The family lived poor, often on the verge of starvation.

Sillitoe attended school until he was 14 years old. He failed entrance exams to grammar school and began to work at Raleigh factory, where he spent the next four years of his life. In his spare time, Sillitoe began reading a lot, and got a reputation of “serial lover of local girls.” When Sillitoe was 18 years old, he joined the Air Training Corps and then the Royal Air Force. He was too late to serve during Second World War but was stationed in Malaya as a wireless operator. After returning to Britain, he wanted to enlist in the Royal Canadian Air Force. However, it was discovered that he had tuberculosis. Sillitoe had to undergo a 16-month treatment program at the Air Force hospital.

Sillitoe was pensioned after being diagnosed with tuberculosis on 45 shillings a week. He was at the time 21 years old. He spent some time in France and Spain and tried to recover from his illness. In 1955, while living in Mallorca, Sillitoe met the poet Ruth Fainlight. The couple married in 1959. During this time, he was working on his most famous book Saturday Night and Sunday Morning. The book is about the attitudes and life situation of a young factory worker in post-war Britain. The book was published in 1958, and in 1960 it was adapted into a movie.

He next published The Loneliness of the Long Distance Runner, which won him the Hawthornden Prize in 1959. The story was adapted into a film in 1962. Sillitoe and his wife lived in Kent, London, and Montpellier at various times. They had a son, David and they later adopted another child, Susan. In London, he was a part of the Bohemian crowd and went to meetings taking place at Stone’s Turret Bookshop on Kensington Church Walk.

During the 1960s, Alan Sillitoe got a reputation for being a spokesman for the oppressed workers in the West. He was widely celebrated in the Soviet Union and went to tour the country several times. In 1968, he addressed the Congress of Soviet Writer’s Unions, and during his speech, he denounced Soviet human rights abuses.

In 1990, Sillitoe received the honorary degree from Nottingham Trent University and the University of Nottingham. During his career, Sillitoe wrote many novels and several poetry collections. In 1995, he released his autobiography titled Life Without Armor. In 2007, Sillitoe released Gadfly in Russia, where he tells about his travels in Russia over the past 40 years. In 1997, Sillitoe was elected in the Royal Society of Literature.
He died on April 25, 2010, in London, after battling cancer.