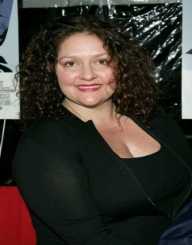 Aida Turturro is an Italian American actress known for her roles in Mafia crime television series.

Aida Turturro was born on the 25 September 1962 in New York, USA. She is the daughter of Domenick and Dorothy Turturro. Aida Turturro was introduced into the world of acting in her early years. The Turturro clan has a number of renowned actors. Aida’s father was an actor. Other members of the larger family in acting are Diego Turturro, Nicholas Turturro, John Turturro, Natalie Turturro, and Ralph Turturro. Unlike her acting life, Turturro was a shy and reserved child. Her siblings were more outgoing and daring than her.

In 1984 Turturro graduated from the State University of New York with a Bachelor’s Degree in Arts. She majored in theatre arts and production. Soon after leaving college, she enrolled at the Carnegie Hall to pursue a career in acting. She apprenticed under the tutelage of Robert Modica.

Turturro started her career in 1989, with her maiden appearance on the film True Love. In 1990 she followed it up with another television appearance on Law and Order. The following year she played a prostitute in the film What About Bob? In 1992 she made her first appearance in a cast that involved James Gandolfini. The two played husband and wife in the television production A Street Car Named Desire. Their working relationship on the screen was seen in many other film production appearances.

In the 1990s Turturro played diverse roles in the films she appeared in. She was a prostitute, police officer, fortune teller to clinical nurse. She got a variety of nationality roles owing to her Mediterranean looks. She played ethnic roles ranging from Italian, Spanish to other Meditterenian nationalities.

In 2000 she auditioned and got accepted to cast in the television series The Sopranos. Tony Soprano, the Mafia boss was played by James Gandolfini. Turturro played the role of Janice Soprano, Tony soprano’s sister. She played the role in revealing her natural qualities and flair. She was the master planner and manipulator in the family schemes. As Janice, she feared very few. She fought and eliminated anyone who stood on her way. She portrayed the direct opposite personality to the motherly figure she was accustomed to. She appeared in the series for over six years until 2007. The series had 49 episodes in total.

Apart from the sopranos, Turturro appeared in other television productions. In 2005 she acted a role in the movie Romance and Cigarettes. This film was directed by her cousin John Turturro, and also featured her friend James Gandolfini. In 2008 she was the medic in the medical series ER. In 2009 she played a different role as an evil spiritual medium in the movie Medium. From 2013 to 2016 Turturro was a sober judge in the series Law and Order: Special Victims Unit. In 2017 she was again in another partnership with Gandolfini. They both appeared in the cast for the film Criminal Minds: Beyond Borders. She played the role of Carmela Tafani.

Turturro has been nominated eight times for a prize award. She got nominated by the Screen Actors Guild Awards six times, winning one in 2007. She was also nominated for the Emmy Awards twice. Turturro was twice unlucky at the Emmy’s.

Even without any reward, her role as Janice Soprano in the Mafia mob series elevated her to a celebrated figure in the film industry.

She has been an awareness crusader for people living with the condition. She is the national spokesperson for the organization Joint Effort Against Rheumatoid Arthritis. She has used her celebrity status to raise awareness of the disease within and outside the US.

In trying to learn of her past, she often visits Italy to acquaint herself with her larger family.

Turturro has been fighting a two-fronted war in her life. She has fought to rise in her acting career. Despite coming from an acting family, she had to gradually earn her space in the film industry. On another front, she has fought two life-threatening conditions. Rheumatoid Arthritis cripples body joints and gets worse with age. Diabetes is more manageable. Even so, Turturro has managed not to let the two conditions interfere with her career or zeal in her community work.