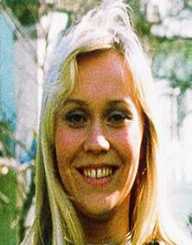 Agnetha Faltskog was born on April 5, 1950. She is a Swedish singer. She is also a songwriter as well as an actress. She is a member of the ABBA pop group. She is currently Sixty-Eight years old.

Agnetha Faltskog was born Agnetha Ase Faltskog on April 5, 1950, in Jonkoping in Smaland, Sweden. She was born to Knut Ingvar Faltskog and Birgit Margareta Johansson.

Agnetha Faltskog was brought up alongside two siblings. In 1956, she wrote her ‘Tva Sma Troll (‘Two Little Trolls’)’ which was her first song. In 1958, she engaged herself in learning piano. She also sang in the local church choir. In 1960, she alongside Lena Johansson and Elisabeth Strub formed ‘The Cambers’ which a musical trio which they used to perform in minor venues.

They later broke up the group due to lack of commitments. In 1965, she dropped out of school with the aim of pursuing her career.

Agnetha Faltskog started working as a telephonist in a car firm. She was performing with Bernt Enghardt’s local dance band. She wrote her second song ‘Jag var a car (‘I Was So in Love’)’ soon after her first breakup.

She later signed a recording contract with ‘Capol Records.’ In 1967, her song ‘I Was So in Love’ was released which led to her fame. In 1968, due to her prominence, she started performing in television special featuring pilots.

She then released ‘Zigenarvan (‘Gypsy Friend’)’ which was a single. She later went to Germany due to their relationship with Dieter Zimmerman who was a German Songwriter and producer. She made top albums in Germany and was yet to produce her songs there until she disagreed with the terms of the offer. She later returned to Sweden.

In 1970, Agnetha Faltskog wrote and released ‘Om tartar vore gold (‘If Tears Were Gold’)’ which spark a case between her and Danish composer for using his composition and she was forced to compensate the Danish composer. In 1972, she was in ‘Jesus Christ Superstar’ international hit musical as Mary Magdalene. She later joined ABBA.

Agnetha Faltskog later did a duet with Tomas Ledin on ‘Never Again.’ She was later featured .in ‘Raskenstam’ a Swedish movie performing a lead role. In 1983, she released ‘Wrap Your Arms Around Me’ solo album. In 1985, she released ‘Eyes of a Woman’ which was a studio album.

In 1986, she performed a duet with Ola Hakansson on ‘The Way You Are’ song. In 1987, she alongside Christian her son recorded and released ‘Kom folk med I var Krusell (‘Come Join Us on Our Carousel’)’ album which contained children’s songs.

Agnetha Faltskog later released ‘I Stand Alone’ solo album in Malibu, California. In 1988, she made an appearance in London’s show ‘Terry Wogan Show.’ In 1997, her biography ‘As I Am’ was published. In 2004, she released ‘If I Thought You’d Ever Change Your Mind’ which was a single. She later released ‘My Coloring Book’ which comprised of the 1960’s hits.

She later that year appeared in ‘Our Last Video’ which was a comedy video. In 2005, she appeared in the opening of ‘Mamma Mia’ musical in Stockholm. In 2008, a compilation album of all her musical career ‘My Very Best’ was released. In 2013, she released ‘A’ album. She later performed live in ‘Children in Need Rocks 2013’ concert in London. In 2016, her biography ‘The Girl With The Golden Hair' was published.

In 2004, Agnetha Faltskog was nominated at the Nordic Music Awards in the best Nordic Artist Awards category. In 2009, she alongside Langstad received the Lifetime Honorary Award at the Swedish Rockbjornen Awards ceremony.

In 2013, she received the SKAP 2013 Kai Gullmar Memorial Award at the release party of ‘A’ in Stockholm. In 2014, she emerged victorious in the Best Female Album category in the 6th Annual Scandipop 2014. She was later nominated in the Artist Rock/Pop International category for the German 2014 ECHO Awards.