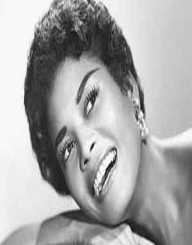 Anna Marie Wooldridge was born on August 6, 1930, in Chicago, Illinois, USA. She had eleven siblings. Her large family lived on a farm and enjoyed the simple life. She later went by the stage name Abbey Lincoln. She used this name as a combination of Westminster Abbey and Abraham Lincoln.

Abbey Lincoln started to sing for fun when she was a young teenager. She wrote many of her songs and sang with local bands. It wasn’t until she was in her 20’s that she started her professional music career. She went through several stage names before deciding on Abbey Lincoln. In the mid-1950’s, Abbey Lincoln met Benny Carter. She recorded with his band. In 1956, she released her first album: Abbey Lincoln Affair: A Story of a Girl in Love.

She continued to sing with various artists throughout the 1950’s. She met Ma Roach, who was famous for jazz at the time. He would later become her husband. She also met with other music artists like Coltrane and Oscar Brown. She would sing with these people and much more into the 1960’s. However, in the early 1960’s she began to focus on acting more than singing. Some of her early albums are listed below.

That’s Him!
Abbey is Blue
Straight Ahead
People in Me

In the 1950’s, Abbey Lincoln had stepped into the world of acting, but it wasn’t until the 1960’s that she began to get serious about it. Her first credited on-screen acting role was in the film Nothing But a Man. She only worked on one other film in the 1960’s, For Love of Ivy. In the 1970’s, she worked as side characters in television series and made for TV movies. Some of the projects she appeared in the 1970’s are listed below.

After the 1970’s, Abbey Lincoln didn’t appear in another movie until 1990 when she played Lillian Gilliam in Mo’ Better Blues. In 1993, she had her own made for TV movie called Abbey Lincoln: You Gotta Pay the Band.

Abbey Lincoln continued to sing while she was acting. She focused more on singing as she focused less on acting in the 1980’s. Some of her most famous albums were released after she slowed down on acting. The 1990’s were also a great time for her. Even though she was getting on in years, even her albums from the 2000’s were hits. Some of her many famous albums are listed below.

In all of her years of acting, Abbey Lincoln only won one award: The Venice Film Festival Award for Best Actress (Nothing But a Man). She was also nominated for a Golden Globe for Best Supporting Actress (For Love of Ivy)

Abbey Lincoln was inducted into the Black Filmmakers Hall of Fame in 1975.

Abbey Lincoln was married to Max Roach, who was also a musician. The couple was married in 1962, but their marriage ended in 1970. The couple had no children together, but Max Roach did have a daughter, Maxine, from a previous marriage.