What Does The Shamrock Symbol Signify?

Shamrock symbolism is an Ireland symbol and an emblem of St. Patrick. The Irish people consider this plant a bit of good luck, abundance, and prosperity. It has three petals and thus, represents the holy trinity in the Irish religion. Also, the shamrock design is widely used in clothing and textiles as interior decors. Others do the shamrock tattoo on their bodies to represent love, healthy, and charm.

Christians associate number three with their faith. And so, the three petals of shamrock represents connections with God among the Irish people. Indeed, the three petals of shamrock represent the Holy Trinity that comprises God the Father, the Son, and the holy spirit. Thus, the shamrock symbol is a sign of salvation. Besides, it is used to represent the life of faith. In addition, shamrock symbolizes spiritual growth, love for one another, and care.

Why Are Shamrocks Lucky?

In the Irish community, having many shamrocks in your home is considered a lucky thing. Its sweet scent gives people a calming sensation. Likewise, it has positive health effects since inhaling the sweet aroma can relieve stress. Indeed, the shamrock plant is a sign of abundance and good luck.

Seeing shamrock in dreams is equally a good sign. It foretells your creativity, having an artistic mind, and a symbol of success. Often such drams tells you that you will advance in life. Shamrock represents greater heights in life and beautiful beginnings. Truthfully, massive shamrock growth in your life is symbolic of your breakthroughs.

What Does Clover Symbol mean?

Tatoo designs usually have their meanings and symbolism. For tattoos with shamrock, plans have an attractive look, intense creativity. Often it symbolizes success, wealth, and achievements. Besides, the shamrock tattoos look good on peaceful and calm people, who know how to tame their pride and maintain their cool.

The symbol of the shamrock is unique to Irish culture and tradition. This fact is generally known and accepted in most cultures – look at leprechauns and trinkets on St. Patrick’s Day. Shamrocks, though, are not to be confused with four-leaf clovers, although both can be associated with good luck and fortune. Although they symbolize roughly the same things, the reasoning behind the symbolism is different.

The Celts were the first people to denote symbolic value upon the shamrock, as their culture reveres the number three. This is evident in their work with design and Celtic knots. Shamrocks were thus viewed as naturally-occurring examples of that sacred and holy number. With its three petals, the shamrock’s symbolic meaning represents the balancing of forces in many ways. 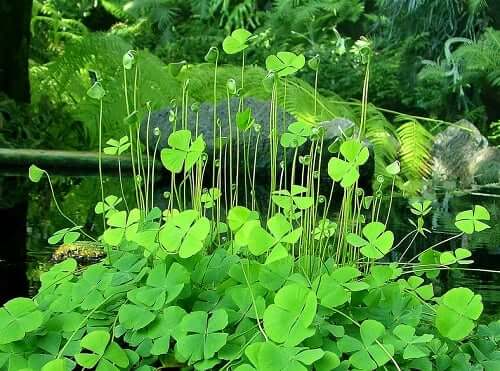 The most well-known associate of the shamrock comes in the form of the stories of St. Patrick. He held the shamrock in the same regard as the ancient Celts, adopting it as a teaching tool. St. Patrick lived his life in a way that demonstrated its symbolism of the holy trinity: the Father, the Son, and the Holy Ghost. Some people also argue that a four-leaf clover actually completes the trinity with the addition of humankind. They say that this causes the shamrock-turned-clover to be a symbol of humanity’s redemption and salvation.

Most, though, tie St. Patrick with the shamrock only. Using the shamrock in his teachings illustrated how a tiny, individual plant could be powerful and meaningful. Because of him, the shamrock and its Catholic symbolism became extremely popular among the Irish. In fact, it is still accepted as the primary spiritual meaning of the shamrock across the Christian faiths. It represents the holy trinity and three of the most decisive Christian virtues: faith, hope, and love.

Across Ireland (and other countries, to be fair), dense carpets of vivid green shamrocks cover miles of fields, symbolizing their connection to abundance and joyful, healthy prosperity. This was, in turn, quite a good omen for farmers who wanted their grazing livestock to be well-fed. Even the scent of shamrocks plays a large role in their interpretation. They emit fragrances sweet tones that have a calming effect on the body and mind, allowing the person to relax and feel content.

On a nationalistic level, military groups often adored their uniforms with a shamrock symbol of pride and protection. During times of conflict with England, Queen Victoria banned the shamrock, which only made it more widespread. Nowadays, the shamrock continues to be a patriotic symbol of strength and independence for the Republic of Ireland.

As with all other features of nature, shamrock symbols can present themselves in your dreams. If you come across one while sleeping, it is usually concerning finances. True to form, it can be interpreted as a positive sign: financial gain, business success, and noteworthy achievements are on your horizon. Some attribute this to the green color, which triggers the brain to have thoughts of refinement and ensure personal satisfaction. More obviously, at least in America, money is green.

Surprisingly, the harp, not the shamrock, is the official symbol of Ireland. Nevertheless, the strength of the connection between the shamrock and this land is undeniable. The beautiful green landscape speaks for itself. Whether the shamrock is viewed as a holy symbol, a sign of abundance, prosperity, and good luck, or an emblem of patriotism, it is strongly tied to the ancient Celtic and modern-day Irish consciousness and surely will be forever.

Indeed, shamrock symbols are good signs, especially in love. The shamrock pattern looks like the three hearts intertwining. Indeed this is a good sign of love. So when you are in love and come across this sign, it means your love is genuine, unending, and will always blossom. Besides, if someone hands you shamrock jewelry, be it a necklace, bracelet, or earing, it means you are loved. Therefore show that person your commitment. Some people hang the shamrock symbol in their homes, business and vehicles because they believe it is a lucky charm; the Irish pride and its cute design make it even more attractive and beautiful.

Honestly, when you come across the shamrock symbols in your life, you should never be afraid. Often shamrocks are beautiful signs of prosperity, financial gain, and growth. Especially to the Irish community, seeing a shamrock means things will never go wrong. For instance, if you are looking for love and suddenly see a shamrock, it means something positive in your romantic life. Indeed, the Celtic shamrock symbols stand for love, hope, and faith to the Ireland people.