Throughout ancient history, the idea of jewelry as mystical objects that protected the wearer extended across the world. The quality and type of metal not only signified that social and economic class of the wearer: it also represented different symbolism. In Celtic culture, jewelry was a prized possession among both men and women. It played a major role in their tradition for both its unique and beauty in addition to the great symbolism that it presented in its design.

The Celtic used silver, gold, bronze, and iron to create some of the most decadent jewelry of their age. In forming artistic objects that were truly symbolic of their culture and heritage, the Celts aimed to incorporate some of their most popular symbols. The end products were nothing short of beautiful. In fact, they are still highly coveted objects even today. 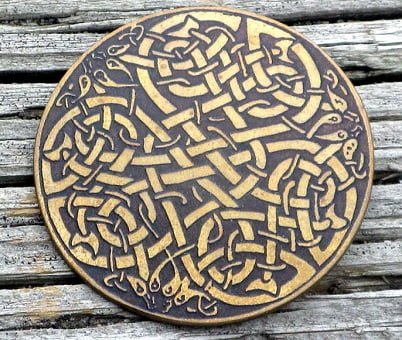 There are several common shapes that make up Celtic jewelry, with specific engraving and emblems to dress them up. One of the most popular and influential across the various ancient European cultures is the torque (or torc).

Resembling a crescent moon shape, the torque was worn first as a necklace before being shortened into a bracelet. As a lunar symbol, it had largely feminine and maternal connotations. Attributes such as serenity, subtlety, and fertility come into play here. However, the torque was also symbolized in depictions with gods and strong and powerful men. This could be indicative of both the necessary balance between male and female energies as well as the stronger, slightly more masculine lunar traits. These include mystery, patience, wisdom, intellect, and the use of a sixth sense. Additionally, torques were signs of nobility in reference to families and a hierarchy within each clan.

Another common piece that pops up in Celtic jewelry is the distinguished cross. The Celtic cross can be seen as a signature necklace and also as a design on all other pieces of jewelry. Although it has the same basic shape as all crosses, the characteristic Celtic knot fills each of the four legs.

A circle, which also contains the complex Celtic knot, sits at the crossroads of those legs. Symbolically, this stands for the unseen bridge between heaven and Earth. The circle, or ring, in the center is a known Celtic symbol for infinite life and love, especially when referring to the love that God has for each of us. Christian Celts might also say that this ring mimics a halo surrounding Christ’s head.

For the pagans or non-denominational Celts, though, the cross was much more physical than religious. From this perspective, each of the four branches refers to one of the four essential elements: earth, air, fire, and water. No matter which way you approach it, the cross was undeniably important to the Celts, as it stood for some of their most highly regarded ideals.

The last of the signature Celtic jewelry pieces is undoubtedly the Claddagh ring. Claddagh was the village that Captain Richard Joyce, the great jewelry-maker, settled in after gaining his freedom from his Moorish goldsmith slavemaster. He created the Claddagh ring as a celebration of his return to his homeland by emulating his deep love for his country and kin in the symbol’s unique design. The band is a typical ring, except for a key feature: a pair of hands sit on the front of the ring, holding a crowned heart in the center. Since then, the ring has been a sign of patriotism.

Nowadays, the Claddagh has even become a popular style of both friendship and engagement rings, which is fitting, as the heart is one of the central features. The crown is a popular Celtic symbol of loyalty, and the hands holding it and the heart represent undying friendship. However, the positioning of the ring is also an important point in its interpretation, so take notice if you see one or wish to adorn one yourself. If the ring is worn “upside-down” and on the right hand, it indicates that the wearer is not in a serious relationship. However, if it’s facing right-side up, the person is in a serious relationship, so take care not to overstep your boundaries. Just like in most Western cultures, a ring worn on the left hand is indicative of marriage.

Any of the hundreds (possibly thousands) of Celtic symbols can be displayed on jewelry. There are no limits to creativity and expressing oneself spiritually. Still evocative in appearance after 25 centuries of endurance, Celtic jewelry and the symbolism depicted on it reveals astonishing skill sets by artists. The beauty, deep meaning, and mystery of these objects has prevailed throughout the ages and still prove to be noteworthy and fascinating pieces of art and history.