Angels play a prominent role in the religious faiths, though it is far from being the only place they are found. The word Angel originates from Greek, and merely indicates a spiritual being. Angels are often, but not always, depicted as being a human like being with great feathered wings which stretch from it’s back, and bear a halo upon it’s head.


The word Angel itself speaks of a messenger, and guardian angels have certainly served as messenger beings for many deities throughout the world. They are seen as largely benevolent creatures, protecting mortals from harm, both from the realm of the spiritual, and the more mundane threats of the physical world. 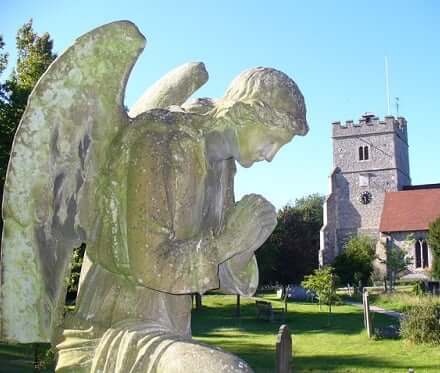 The most commonly known and viewed Angels of the western world have made many appearances in common media. From movies like “Prophecy” which covers a second war in heaven, to the tongue in cheek “Dogma” by Kevin Smith, angels or guardian spirits are a very prominent part of modern storytelling. There were seen to be several courts of angels, and each of them had a different appearance based on which court they fell into.

One of these is the Seraphim, literally the “Burning Ones”. These beings bore six wings and circled the Throne of God, entoning “Holy, Holy, Holy, is LORD of hosts: the whole earth is full of His glory.” Two of the six wings covered their feet, two were used to fly, and two covered his face. These beings are only mentioned on three specific occasions within the Bible itself.

Another well known class is the Cherubim, represented as a lion or bull with eagle‘s wings and a human face. These beasts are considered to rank second in the nine-step hierarchy of the angels. These creatures first appear in the Bible at the garden of Eden,  guarding the path to the tree of life.

These are just two ranks of the nine mentioned in the Judeo-Christian bible, but divine spirits like them are visible in many religions of that area. They bear an unmistakable resemblance to the Lamassu in Phoenician culture, the Cherubim bearing precisely the same description as those in the Christian texts.

Because of this it is clear that spiritual beings such as the Angel predate the Christian faith, and were absorbed by them as it developed. Winged beings are tied to many cultures, and are almost always messengers, as is common with creatures tied in this way to birds and other airborne creatures.

In modern occultism, Angels are incredibly popular beings, with Angel Cards, cognate to other forms of cartomancy, being a newer addition. Further aspects are ‘angel stones’ bearing their image and ‘Angelic Numbers‘ being born rather logically out of Numerology and other reborn arts and practices. Much research is suggested if one wishes to work with Angels or believes they feel their touch in their lives, as one should be certain of that with which they are working.