Mysterious maidens hiding in nature, a nubile young lady swimming nude in a pond in the deep woods, these are stories that have been passed down through history in every culture. Most likely what are being seen are described in Greek mythology as ‘nymphs‘. These spirits are stewards of nature, and there are five types recognized by these Grecian scholars. Each type was tied to some aspect of nature, and give life and virility to that natural space.

The spaces that you will find nymphs inhabiting will be places of great natural beauty, and one must take great caution with these places. They will defend them with what abilities they have, but know that you can cause harm to these gentle beings by polluting that area they inhabit. They are inextricably bound to these natural features, and are affected by things that affect these places. 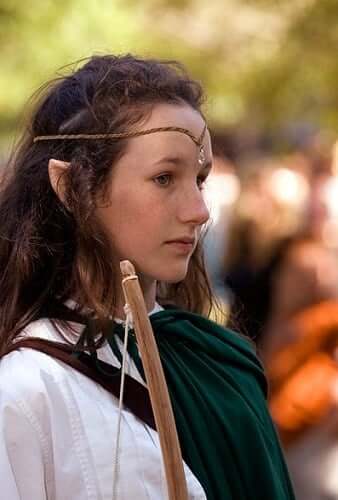 In some cases, there are names given for certain classes of nymphs. There are Celestial Nymphs, Land Nymphs, Plant Nymphs, Underworld Nymphs, and Water Nymphs by classification. But the water nymphs themselves are typically known as Nereid. There are those who speculate that mermaids, sirens, fall under the spectrum of nymphs, but it is likely that these are each different creatures with their own realms of control.

It is perhaps likely that nereids were the most commonly known because one can find water just about everywhere. They are certainly the most well known, and in some cases reviled. Nymphs love tricking and attracting men and women.

They as such are quite fond of being coy and playful, bathing nude in the waters of mountain and forest streams and waterfalls. They deliberately act out in ways to attract attention to themselves like the fairies. It’s sometimes said that if you allow them to get a hold on you, you will be dragged into their watery realm and never be seen again.

These tendencies have carried over in some of the terminology we’ve been known to use today. The term nymphomania is referred to as a “desire to engage in human sexual behavior at a level high enough to be considered clinically significant”, and young girls who are sexually precocious are referred to as nymphet, a word made infamous by Vladimir Nabokov’s book “Lolita”.

If you should find yourself near a Neried’s home, or a place you believe a nereid to inhabit, remember that respect of their home and their realm is of paramount importance. Leaving them small gifts such as swaths of cloth, candles, or even simply scattering rose-petals upon the waters of their homes can be welcome.

Small crystals can be left for those who dwell in earthier dwelling, or even tossed into ponds. Ribbons and decorations can be tied about as well.

Share
Previous Are Pets Ruining Your Relationship?
Next Hazards Ahead! 10 Types of Men You Should Never Date