How good or bad is the love compatibility between a Gemini and Aquarius emotionally, mentally and sexually? Read on…

The Gemini and Aquarius compatibility is truly a beautiful one. There are so many similarities between these zodiac signs that it is more likely than not that this couple will last longer than the average relationship. Gemini loves to learn and is constantly looking for new ideas and thoughts to build on.

Aquarius, on the other hand, is already full of ideas that they are ready to share. They are quite the imaginative sign, which their lover finds overwhelmingly attractive. The attraction in a Gemini Aquarius relationship may be instant, like love at first sight. They can also start off as friends and work their way up to a romantic partnership.

Gemini is enthusiastic in life, but sometimes they can let their emotions get the better of them, which could slow down the start of the relationship. Luckily, the Aquarian is not afraid to say what they feel, so they can easily make up for any lost time that the Twin might cause.

The Gemini Aquarius in love are full of energy, mentally and physically. They love bouncing ideas off of each other, going on adventures together, and tiring themselves out in bed as well. The Gemini and Aquarius in bed are almost an ideal couple, and there is not much that can get in their way when they are determined to get what they want sexually.


Both the Gemini and Aquarius soul mates need their independence once in a while. Although they love spending time together, sometimes they need a moment alone. When this happens it doesn’t mean that the Gemini Aquarius compatibility is starting to flicker away, but instead it could mean that when the two are done with their alone-time and get together that their relationship will be even stronger than before.

In this Gemini Aquarius love compatibility, both understand how important their freedom and independence is, so they will have no problem giving their partner space to breathe when they need it. Neither of these zodiac signs are very demanding, and they are definitely not possessive.


The Gemini dating an Aquarius have their own ideas about the world, and they love coming together and looking at their ideas, fixing them, and making more ideas together. These two are a creative duo who can get anything done when they put their minds to it, and they can have a good time while doing it as well. 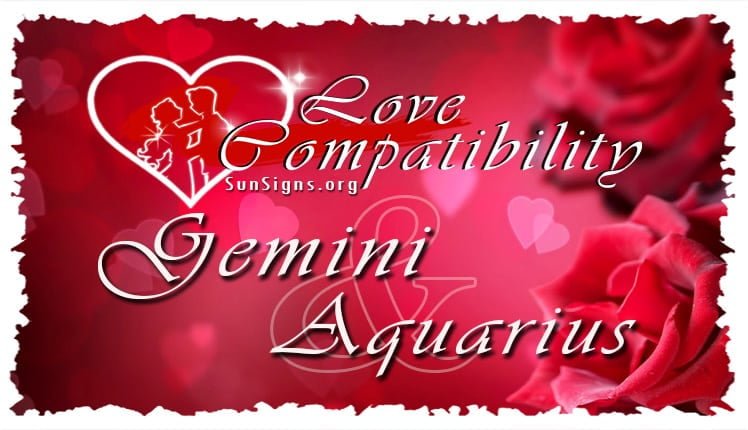 Let’s look at some pros of a relationship between a Gemini man and an Aquarius woman. An Aquarius woman is often full of strange and imaginative ideas that not many other signs will want to listen to. However, the Gemini man loves to listen to his woman’s ideas, even if they do seem a bit odd. He loves to support her in her thoughts, and he helps her to build them while also building his own knowledge base.

The Aquarius woman loves to have someone to listen to her, as it is likely that she does not usually get a lot of support for her ideas. She is so happy to have a Gemini man in her life. One the same sort of topic, he can be sensitive, and he will want to talk about his feelings.

Other signs could be annoyed by this or think that it is childish, but an Aquarian will be sure to listen. She knows what it is like not to be listened to, and she won’t let her man go through that. For sure, these two signs will always be there to support each other, no matter what the cause is.


Of course, there are also many pros of a Gemini woman being in a romantic relationship with an Aquarius man. Both of these people tend to be more or less carefree. They bring out the inner children in each other. It will be easy for these two to make friends with each other, and after that it shouldn’t be hard to become romantically involved with each other.

These two are likely to have a life full of adventure and exciting experiences. They thrive off of positive energy, and so long as they are in a good mood their relationship should move along. There is hardly a thing that can stop the Gemini Aquarius couple from falling head over heels for each other. They have so many ideas and passions that are similar.

In the Gemini Aquarius compatibility, both are almost bound to have a good time together. There is a very low chance that these two will get into too many arguments. Gemini women are great at communicating their thoughts and feelings with their partners, and they are also great at smoothing out any problems that they may have. The Aquarius man is also good at telling his Gemini woman when something is wrong, and they can easily work out these problems with each other.

Of course, there has to be some cons to this Gemini Aquarius love compatibility as no relationship is perfect. These two love going on adventures and learning together, but neither of them really love the idea of settling down. This can affect whether or not they even get stable jobs. They will want to do something that is exciting rather than routine, and there aren’t all that many high paying, low-skill level jobs out there. This can cause the Gemini and Aquarius couple to be financially unstable, which can easily stress out any couple. When upset, these two are likely to take it out on each other.

While the Aquarius woman daydreaming thoughts are usually seen as charming and cute, the Gemini man is likely to start being annoyed with them once she focuses more on her fantasies than finding a job. The Water bearer also likes to be active when it comes to social issues. She and her man are likely to disagree on more than one of these issues, which can easily cause tension to form in their relationship. If they differ on too many social issues then this Gemini Aquarius compatibility might not last for long and break up.

However, there is always cons with a relationship, even one that may seem as perfect as one between a Gemini woman and an Aquarius man. Both need their freedom, but for some reason the Aquarius man seems to fight extra hard for it, even when he may not need to. This could be seen as him picking fights when he doesn’t have to, which could lead to some problems within the relationship.

Gemini women also tend to be sensitive, so she could take his anger personally, even if it is not directed at her. She may see herself as being in a verbally abusive relationship, which is no good for anyone. While these two do get along most of the time their fights can be passionate, but draining.

One day they could just be tired of the arguments and decide to call it quits. This is more or less around a worst case scenario though. Most Gemini Aquarius marriages do not get this bad. These two need constant sexual excitement if they are to make things work. A lack of adventure could make things dull between the two, which could slowly lead to the end of the Gemini and Aquarius love compatibility.

In most cases, the Gemini and Aquarius love compatibility is a great one, filled with free-following creativity and excellent communication skills. If the can make is through the small fights that they will get into occasionally, then they are sure to be able to be a couple that will be remembered through the ages as being supportive as well as adventurous.