Are Cancer women and Taurus men compatible mentally, emotionally and sexually? This water sign matches with this earth sign in a very compatible manner. She is like a lovely ocean washing over the stable land of his personality. The female crab is cautious, which the male bull appreciates. The Cancer woman Taurus man couple navigates a similar course together, reaching new and satisfying heights. Can Cancer woman and Taurus man be together? Read more to know.

One commonality between the Cancer woman and Taurus man is their methodical natures. She is careful and thorough when researching anything new, which instantly appeals to him. They will become great friends to start, as they both like to take things slow. He enjoys the ease of their conversations, and she is drawn to his practical way of thinking about this Cancer compatibility.

Security is significant to each sun sign, and the Taurus male will happily provide a safe platform upon which to build their relationship. He is secure in his life and his money, and the Cancer female appreciates how responsible he is with his finances. The Cancer woman and Taurus man match will both save for their future, which will help to strengthen their bond.

The sexual attraction between Cancer woman Taurus man lovers becomes apparent almost immediately, as he physically experiences their lovemaking while she offers the emotional touch.

The Cancer woman sexually and the Taurus man sexually are both very slow and sensual in their strides, and the captivating foreplay leads to some extremely passionate times between the sheets.

Also, the Cancer woman’s intuitive side will draw out every one of his desires, and she will take great pleasure in satisfying them. The Taurus man adores her caring and nurturing manner, and he makes her feel safe and secure in their union.

The Taurus male is healthy and grounded, allowing her to lose herself in the heat of the moment. They support each other’s wants and needs, which leads to a beautifully gratifying experience for both of them. Dating a Cancer woman or dating a Taurus man comes with security.

This love compatibility will flow into maintaining a stable household as well. Cancer women make caring homemakers while the Taurus men are able breadwinners, offering the best of both worlds to their mate.

They will need to compromise on who takes the lead every once in a while in this Taurus compatibility, for he is steadfast in his thinking and she is cautious with her choices. But because both these zodiac signs are good at communicating their thoughts, they will find a harmonious balance between his rock and her waves. For even though she may crash against him at times, they are both fiercely loyal people who are in it for the long haul. 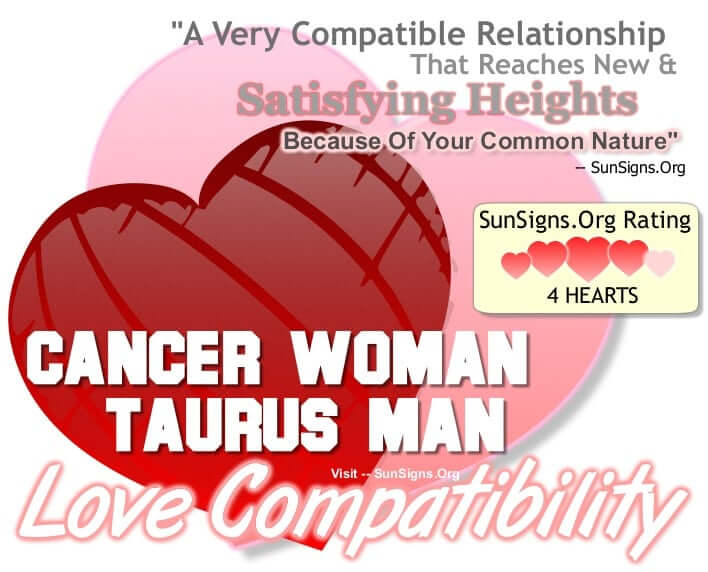 The Cancer woman and Taurus man will only hit a snag when she becomes emotional over something he would find trivial.

The Taurus male is more stoic than she is, and this will be a drawback for both of them. But her feelings for him are apparent, and he may be willing to overlook this flaw to move things to the next phase.

The Cancer woman in love will have to be careful though, not to run into his stubborn nature. If she disagrees with him, and she will deal with her ever-changing emotions, the argument may bring out his brutal temper.

This will cause her to retreat into her shell until the dust has cleared. The Taurus man in love will have to get used to the tides of her feelings, and she will have to adapt to his unwavering decisions.