How good or bad is the love compatibility between a Gemini and Pisces emotionally, mentally and sexually? Read on…

Gemini is an outgoing and intellectual sign, no matter their gender. They love to try new things with their partner. Pisces is an open-minded sign and will love to come on any adventure that their has planned. They will even go on a trip that their lover had thought of in a spur of the moment. They have no qualms about going into things rashly. The same were to go if the Piscean had thought of an activity to do quickly and had asked the Twin to come along.

In the Gemini Pisces relationship, the two simply love new and exciting things, no matter when the opportunity happens to come up. The more spontaneous the event, the more exciting these signs expect it to be. Gemini is a sign that craves adventure, and Pisces is a zodiac sign that loves to go along for the ride.

In a Gemini and Pisces compatibility, it is almost sure to make a peaceful and fulfilling romantic relationship together. These two signs have many zodiac personality traits in common that help to make them a couple who can get along with each other easily.

There is hardly room for arguments in the Gemini and Pisces friendship. The two simply get along with each other too well! These two are likely to start out their relationship together as friends. They will be attracted to each other first because of their similarities. Later on when the Gemini starts dating the Pisces, they will learn to either accept or love each other’s differences. 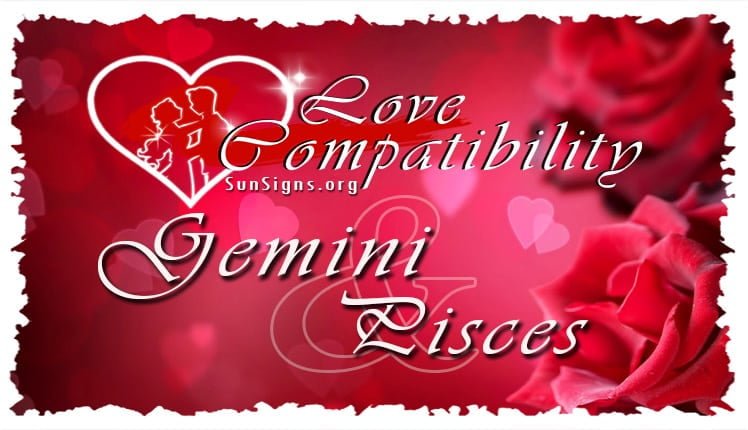 Gemini and Pisces in love are both in touch with their inner feelings, even if they may act on it in different ways. Gemini likes to talk to other people to sort of their problems. They are rather social sign, and they like to look for others to help. This could easily be how they got a deep connection with Pisces in the first place.

The Fish has a dreamy disposition, and they usually look extremely approachable; this is a trait that could easily attract the Gemini. The Pisces birthday, on the other hand, is more in tune with their feelings, they are not as anxious as the Twin can get, but they are more empathetic. This can make it easy for them to help others with their feelings. But they may have problems when it comes to helping themselves. They are likely to need Gemini’s help when it comes to sorting out their own problems.

The Gemini and Pisces soul mates are great at helping each other with their emotions, which could be one reason why these two signs are so compatible with one another. The Gemini Pisces compatibility can be the basis for a great relationship so long as they work for it. If they get lazy things might not go so well though…

Since the compatibility between the Gemini and Pisces’ signs are aligned so well, there are definitely some pros to a Gemini man being in a romantic relationship with a Pisces woman. Both understand how important it is to understand each other’s emotions, which is one thing that makes this couple so great.

The Gemini man can help the Pisces woman to act more, rather than thinking about acting. She can help her  man with his emotions and listen to him when he is feeling down. Both in this Gemini and Pisces compatibility simply realize how important it is to listen and to be considerate in a romantic relationship.

Both are able to realize that a good Gemini Pisces marriage compatibility needs to have work put into it so that the relationship itself can work itself out. Because they know this they are likely to work on their relationship when they have problems, rather than calling it quits and breaking up. When these two really put their minds to it they are sure to be able to make their relationship last.

Like the opposite genders, a Gemini woman and a Pisces man getting together in a romantic relationship can also have some pros to it. These two signs love to learn and create new ideas, and they love to share ideas with each other. These two may have a tricky time when it comes to actually getting together, but once they do, both in this Gemini and Pisces love compatibility are bound to do their very best to make their relationship work. They aren’t the type to quit just because it’s getting hard.

The Pisces man is the creative one; he likes to think outside the box. The Gemini woman is more of an intellectual thinker, but she likes to try to put an educational spin on her man’s creative ideas. Both these signs are not quick to anger, which is a great quality to have in any romantic partner. Because of this neither one are apt to pick a fight or to become strict with their partner. They are more likely to talk out their problems, rather than to yell about it behind closed doors.

Unfortunately, there are some cons to a Gemini Pisces love compatibility. While this couple’s similarities are great at bringing these two signs together, their differences can very well break up. A break up between a Gemini man and a Pisces woman is not one that happens without some thought to it. These two are more likely to drift apart, rather than break up dramatically.

The Pisces woman is a sensitive creature, and sometimes she can’t cope with her Gemini man’s actions. For instance, the he can be rather flirtatious, even when he is already in a romantic relationship. This can cause the Piscean to become jealous and to feel hurt. This could even damage the trust that she has for her Gemini mate.

A Pisces lady’s trust is frail, and once it is broken it is hard to fix. The Gemini male may be in touch with his own emotions, but he won’t like to see his woman when she is sad, especially when she is sad much of the time. The varying emotions in the Gemini Pisces love compatibility may be the thing that starts to make their relationship fail, and there isn’t much that a person can do to change their emotions.

There are some cons to a Gemini woman being in a romantic relationship with a Pisces man as well. These two often get along on the surface, but sometimes they may have problems that are a little harder to work out. While they are okay with the basic parts of a relationship they often have problems when it comes to getting to know each other on a deeper level especially when in bed.

If the Gemini Pisces zodiac match want to be able to have a solid relationship then they are both going to need to put a lot of work into making that happen. Also, both can be flirts. He won’t like it when she is flirting with someone else, and he may even see it as her wanting to cheat on him.

The Pisces man is likely to spend a lot of time worrying about this problem, and he may also be shy when it comes to talking to his Gemini woman about this problem. Also, these two have been known to lie to each other to try to make the relationship work. This is obviously a bad idea, as trust can be broken when one finds that the other is lying.

The Gemini  and Pisces love compatibility can take some work, and there is bound to be some ups and downs to it. If these signs can learn to play off of each other’s strengths and learn and accept each other’s differences, then this Gemini and Pisces relationship just might be able to make it work. All relations need some effort to be great, and this one is no exception to that rule.