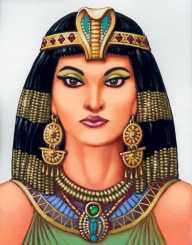 Cleopatra VII was born approximately 69 - 10 or 12 August 30 B.C. She was an Egyptian queen who ruled the empire during the 1st century B.C. She is today celebrated as one of the most influential female rulers of all time. Cleopatra VII had other strengths including being a diplomat, a medical author, naval commander as well as a linguist.

Cleopatra VII was born approximately 69 - 10 or 12 August 30 B.C. She came from the Ptolemaic dynasty and as a descendant of its first ruler, Ptolemy I Soter. She also hails as the last leader of the Macedonian family; a chain of a rule that started in 323 B.C.

Although she spoke Koine Greek as her mother language, Cleopatra learned and spoke the Egyptian language as well, making her the first ruler to do so. In her active days, she studied at the Library of Alexandria and the Museum.

Cleopatra rose to the throne and became the first queen of Egypt only at the age of 18. She took over the role alongside her brother Plotemy XIII following the death of Plotemy XII in 51 B.C. Her reign would later face challenges including a weakening economy, famine, and floods.

Immediately after assuming power, the two siblings began experiencing complications. As a result, Cleopatra escaped to Syria. Here, she brought together an army which later helped her regain the throne for herself. In 48 B.C. she went on to face her brother Pelsuim with her fierce military on the eastern edge of the empires.

Cleopatra VII first met and fell in love with Julius Caesar. Together they had a son, Caesarion. The two came together after the civil war that broke in Rome between Caesar and Pompey. Cleopatra then met Marc Antony in 41 B.C. post the murder of Julius Caesar. They had three children together; the twins Cleopatra Selene and Alexandria Helios and their son PlotemyPhiladelphus.

Cleopatra VII died around 31 B.C. After her death, Egypt became part of the Roman Empire as a province. Her reign left behind a legacy admired by many including storytellers as well as historians.