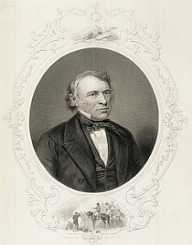 Zachary Taylor was born on November 24, 1784, in Barboursville, Virginia. He spent most of his childhood in Louisville, Kentucky. Besides him, his parents had seven other children. The planter family owned 10,000 acres in Kentucky and 26 slaves.

Taylor knew from an early age that he wants a career in the military. He began his military career in 1808 when he became the commander of the garrison at Fort Pickering. He married in 1810 and settled his family in Louisiana. There, he commanded the Baton Rouge fort.

Zachary Taylor's name became widely known after the 1845 battle with Native Americans. He was named the Indian fighter, and despite fighting the Native Americans, he also wanted to protect their lands from settlers. As a leader, he was open towards his troops and shared their hardships on the battlefield. For his efforts, he became known as the Old Rough and Ready. Taylor became the National Hero during the Mexican War, where he won several decisive battles. After gaining national popularity, Taylor was seen as the possible future president.

Taylor was a member of the Whig Party but identified himself more as an independent nationalist. The Northerner’s appealed to him for his military record, while the Southerners- for owning slaves. These controversies were overlooked since the party positioned him as the National Hero.

Zachary Taylor was elected the 12th president of the nation and replaced president James K. Polk in 1848. He was racing against the Democratic Party’s Lewis Cass and the Free-Soil Party, led by Martin Van Buren. During the presidential debates, Taylor took an anti-slavery position. He also urged California and New Mexico to write their constitution and apply for a status of a state. He knew that both states will most likely bar slavery, and was correct.

His actions were seen as a betrayal by the Southern States. The Southern states began to threaten secession, to which Taylor responded with threats to hang the rebels. In 1859, only after 16 months in the office, Taylor died. He was succeeded by the vice president Millard Fillmore. Despite his actions towards resolving the slavery issue in the country, he couldn’t make matters better and prevent the Civil War.

In 1810, Zachary Taylor married Margaret Mackall Smith from Maryland. The couple had six children, who were raised in Louisiana.
Taylor was attending holiday celebrations and a fund-raising event at the Waschington Monument. During these events, he was consuming large amounts of fruits and iced milk. In the next several days, he became ill with the so called cholera morbus- the name for intestinal ailments which are not connected to Asiatic cholera.

At the time cholera was a widespread epidemic in the country. Zachary Taylor's illness has been a topic for controversies, but it is also known that several of his cabinet members were also affected by the disease.

After Taylor's death in 1950, his funeral was attended by an estimated 100,000 mourners. He was buried near Louisville, Kentucky, in the Zachary Taylor National Cemetery.