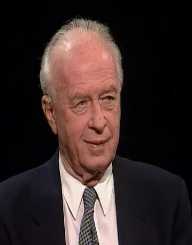 Yitzhak Rabin was born on March 1st, 1922. His birthplace was in Jerusalem, Mandatory Palestine. He is famous for being the fifth prime minister of Israel. He served his nation for two terms before being assassinated while serving in his second period. During his first take over as the prime minister, he also broke records as he was the only Israeli native to take that post in 1974. Rabin is a Nobel Peace prize winner for his efforts in trying to bring peace with Yasser Arafat, a Palestine leader. He was assassinated in 1995.

Yitzhak Rabin was born on the first day of March in 1922 in Jerusalem, Mandatory Palestine. His parents were Nehemiah and Rosa. His early interests in the field of agriculture landed him into Kadoorie Agricultural School in 1937. During this period, he was hailed for his academic skills more so in the subjects that touched on agriculture. However, he performed averagely in English. This was the language that his enemies, the British, used to communicate.

Soon, Yitzhak Rabin craved to engage in the on-going World War II, and this motivated him to become a member of a certain commando unit called Palmach. Considering the fact that he perceived the British as his enemies, he was captured and put behind bars for 4 months. After being released, he later participated in a war against the Israeli which occurred in the period from 1948 to 1949.

The 1950’s period brought changes to the life of Rabin with regards to his military career. At this time, he took every opportunity that would see him rise in the ranks of his military career. It is during this time that he went through the British Staff College. By the time 1964 approached, Rabin had risen to the ranks of chief of staff. His new rank contributed to his career boost later on as he led the military to conquer the Arabs in 1967 during the Six-Day War. This followed with his retirement as he took the position of being the U.S. ambassador.

Sooner or later, Rabin ventured into politics and became a member of the Labor Party. In 1973, the party was re-elected back to power, and Rabin was called to serve as the minister of labor. A month later, he was fortunate enough as the current Prime Minister, Golda Meir resigned. This was his gate pass to the post of Israeli prime minister in 1974. He was only in his early 50s, making him the youngest ever prime minister in the country’s history. In addition to this, he was an Israeli native to take this post, something that had never happened before.

While serving as the prime minister, things did not work out smoothly as expected. His tenure was coupled with several controversies including an official ban on the trade of oil. Economic challenges were also heavy on the nation following the recent war clashes that they were recovering from. The law came down heavy on him in 1977. This was after the realization that Rabin and his wife owned United States bank accounts. Legally, they had violated currency statutes of Israeli and therefore were forced to resign.

Yitzhak Rabin wedded Leah Schlossberg at the time when his country was at war with the Arabs in 1948. During this time, Leah was a reporter for the Palmach, the elite fighting force that Rabin was associated with. The couple had two children together.

On November 4th, in 1995, Rabin was attending a peace rally in Tel Aviv when Yigal Amir assassinated him.