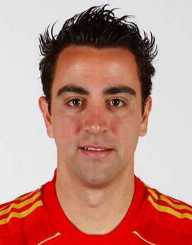 His rapid rise through the reserve team saw Barcelona B, win promotion to the second division. As a young aspiring footballer, Xavi grew up watching Pep Guardiola who was later his coach.

In addition to his early success in the club level, his team won 1999 FIFA World Youth. In 2000 his team earned a silver medal from the 2000 Olympics. During his debut season, he played 26 matches for his club. During that season FC Barcelona won the Spanish League.

Between 2001 and 2003, FC Barcelona struggled financially. During this time, Xavi Hernández played a more defensive role. In the two seasons, he scored seven goals and made 20 assists.

Despite FC Barcelona’s financial problems, the club managed to put together a golden generation of players including Andrés Iniesta, Carles Puyol, Ronaldinho, and Deco.

Xavi Hernández' style of play suited the club’s passing style. He deputized Carles Puyol as the vice-captain of the club.  FC Barcelona went on to win the league title in 2005 and later the super cup.

The footballer tore his ligament in 2005-2006 season during a training session. He stayed out for four months before returning against Arsenal in 2006 UEFA Champions League final.

After helping Spain through the Euros, speculation over Xavi Hernández' possible move to Bayern Munich dominated the sports news around Europe. Pep Guardiola, the newly appointed coach, convinced him to stay with the club. He paid his contract extension with a treble win for Barcelona.

His four assist against their bitter rivals helped Barcelona thrash Real Madrid by six goals to 2. In addition to their local success, the club also won the UEFA Champions League. Due to his exceptional contribution, his club awarded him a contract worth €7.5 million. He became one of the club’s highest earners.

In 2010, Xavi was among his teammates Lionel Messi and Andrés Iniesta named for the Ballon d'Or trophy. Xavi however finished behind both Messi and Iniesta.

He matched Miguel on match appearance against Levante on 2nd January 2011. During that season, he helped FC Barcelona beat Manchester United to lift the Uefa Champion League Cup for the third time.

Xavi Hernández made his 700th appearance against Getafe FC. However, during that season, Barcelona ended the season without a trophy.

Xavi Hernández announced in June 2014 that he was leaving his childhood club. The newly appointed coach Luis Enrique, however, convinced him to stay with the club for one more season.

During that season he was made the captain of the club. Later that season, a farewell was held for the club’s captain. His last major trophy came when Barcelona beat Juventus FC in to lift the UEFA Champions League.

Xavi Hernández' first major trophy for Spain was Euro 2008. Spain beat Germany by a goal to nil. Xavi won the player of the tournament trophy. Xavi's biggest trop0hy in the international stage came in 2010 when Spain beat Northlands in the finals of FIFA World Cup.

On 21st May 2015, Xavi Hernández joined club Al Sadd on a three years contract. In addition to his contract, Xavi will be made 2022 FIFA World Cup ambassador.

Xavi Hernández is married to Nuria Cunillera since 2013. The couple has a daughter together.