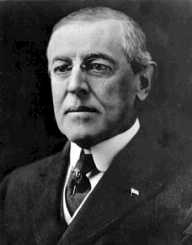 Thomas Woodrow Wilson was born on December 28, 1856, in Staunton, Virginia. His father was a Presbyterian minister, and his mother was a housemaker. The family moved very often during his youth over the South of United States. In 1870, Wilsons settled in Columbia, South Carolina where his father taught at the Columbia Theological Seminary. During the Civil War, his mother attended to the wounded soldiers, and Wilson witnessed the horrors of war.

Wilson was not an excellent student at the school, and most likely suffered from a form of dyslexia. However, his father trained him in oratory and debate, which became Wilson’s passion. He attended the Davidson College, but in 1875 transferred to Princeton University. He studied law at the University of Virginia and later earned Ph.D. from Johns Hopkins University in political science.

After earning his Ph.D., Thomas Woodrow Wilson began his university career. He was appointed at Bryn Mawr and later at Wesleyan. However, he dreamed of becoming a professor at Princeton. He reached his goal in 1890, and in 1902 became the president of the University. He was one of the most popular teachers on the campus and was widely known for his oratory skills. In 1906, his life came in danger, when Wilson suffered a major stroke.

Wilson’s political views were inclined towards Social Democracy. In 1910, he was selected for the governorship of New Jersey and succeeded in his position, which led to him being nominated for the presidency in 1912. Wilson ran for the presidential post and won. The election was quite unusual since Wilson ran with the Democratic party, but from the Republican party, there were two candidates- William Howard Taft and Theodore Roosevelt. The two Republican candidates split the vote and secured Wilson’s win.

When Thomas Woodrow Wilson began his presidency, one of the most substantial issues at the time was the women’s suffrage movement. Initially, he was not on board with the women’s right to vote. However, his views evolved, and Wilson began to support the cause. In 1917, some of the protests became violent. Women were jailed, some who went on a hunger strike were being force-fed. Upon learning about this, Wilson was outraged, and in 1918, Wilson publicly supported women’s right to vote in front of the Senate. The 19 Amendment was ratified on August 18, 1920.

When the World War I broke out in Europe, Thomas Woodrow Wilson declared that America would remain neutral. His decision became his campaign slogan “He kept us out of the war.” However, in 1917, he finally asked the Congress to declare war, after Germany continued to ignore neutrality and sunk several U.S. ships.

World War I was later called the “Great War” and Americans became the heroes. Wilson proposed his Fourteen Points for the treaty of Versailles. The treaty created the League of Nations. However, the Congress did not approve that the U.S. join it. For his efforts, Wilson was awarded the Nobel Peace Prize in 1920.

While in office, Thomas Woodrow Wilson appointed several Southern Democrats to his Cabinet and had many allies in Congress. During his presidency, several advancements of African Americans were cancelled. During this time, Jim Crow policies were implemented in several government departments, and segregation became more and more pronounced. Wilson himself was never an advocate for these policies. However, he did not oppose them.

Wilson believed that segregation is a benefit to African Americans. Upon meeting with the civil-rights leader William Monroe Trotter, Wilson claimed his administration is preventing friction between races. Trotter accused Wilson of lying and called his claim ridiculous.

While working in Atlanta, Thomas Woodrow Wilson fell in love with Ellen Louise Axson. The couple met in 1883 and soon married. They had three daughters together. In 1907, Wilson had an affair with a woman on resort while visiting Bermuda. His wife Ellen died of kidney disease during his first year of presidency.

Several months after his wife’s death, Wilson met Edith Bolling Galt and developed a relationship with her. The couple married in 1915. She became the first United States First Lady to travel to Europe on a goodwill tour. After his second stroke in 1919, Edith was hiding how severe his illness is and made decisions for him.