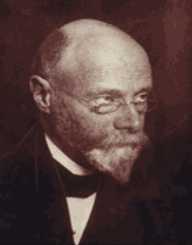 Willem Einthoven was born on May 21, 1860, in Semarang, Java, Indonesia. The area was then known as the Dutch East Indies. Willem’s parents were Jacob Einthoven and Louise de Vogel. His parents were Dutch, not Indonesian. Willem also had five siblings. Jacob died when Willem was only six years old. When Willem was ten, his mother moved him and siblings to the Netherlands.

Willem Einthoven attended the University of Utrecht. It is here that he earned his medical degree. He initially intended only to be a doctor, until he discovered that he was a great researcher. He continued to study as he worked, getting his doctorate in 1885. His doctoral thesis was Stereoscopie door kleurverschil, which roughly translates to Stereoscopy by color difference.

After graduating from the University of Utrecht, Willem Einthoven began working at the Gasthuis voor Ooglidders, an eye hospital. At the hospital, he worked with a prominent doctor in the area, Dr. Snellen. In 1886, Willem left the eye hospital and moved onto his next job as a professor at the University of Leiden. There, he taught physiology. While at the school, he taught, but he did not forget about his research.

Einthoven’s greatest medical accomplishment began to form as he got a job working with capillary electrometers in 1889. These machines were used to detect small electrical currents and were used to measure heartbeats, and they interested Einthoven very much. Willem Einthoven worked to make the capillary electrometers work better, as they could not currently be used to diagnose much. His job was to change all of that.

After inventing the string galvanometer, Willem Einthoven continued to study the heart. He began to work with leading cardiologists to try to find a correlation between heartbeat patterns and heart problems. In the late 1900’s to early 1910’s, he also studied what a normal heartbeat graph would look like so he would have something to compare his other research too. He added this research into his inventions, working on electrode arrangements. In 1923, he had a new invention, the string phonograph.

Aside from his inventions, Willem Einthoven also contributed many ideas to medicine. He made the idea of Einthoven’s Triangle, the P, Q, R, S, and T letters for heart conditions (which are still in use today). He continued to work in medicine until his death.

Willem Einthoven’s most important published also works double as medical papers. Some of his most important papers (with their translations) are listed below. Über die Wirkung der Bronchialmuskeln Nach einer neuen Methode untersucht, und über Asthma nervosum (On the action of the bronchial muscles investigated according to a new method, and about nervous asthma)

Willem Einthoven won the Nobel Prize in Medicine in 1924 for his work with inventing the electrocardiogram.

The basic format of Einthoven’s string galvanometer is still used in electrocardiography today. He even helped to come up with the term, electrocardiogram (now better known simply as EKGs).

Willem Einthoven died on September 29, 1927, in Leiden, the Netherlands.  Einthoven had been suffering from some ailments before his death, so there is no saying exactly what caused his death.