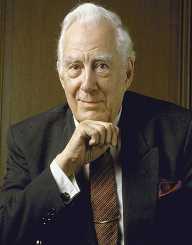 Warren Earl Burger was born on September 17, 1907. He was an American justice. He was the fifteenth Chief Justice of the United States of America. He served in the post from 1969 until 1986. He was known for his conservative decisions in the Burger court. He died on June 25, 1995, at the age of eighty seven.

Warren Earl Burger was born on September 17, 1907, in Saint Paul in Minnesota, United States of America. He was born to Katharine and Charles Joseph Burger. He was brought up alongside six siblings. He went to John A. Johnson High School. In high school, he was the President of the student council. In 1925, he graduated from high school. In the same year, he was a part of the crew which was tasked with building the Robert Street Bridge.

In 1952, Warren Burger became the Assistant Attorney General in charge of the Civil Division of the Justice Department. In 1956, he was appointed to the United States Court of Appeals for the District of Columbia Circuit, a post he held for thirteen years. In 1969, he was nominated for the position of United States Chief Justice by President Richard Nixon. The Senate confirmed him, and in 1969 he was sworn in as the 15th Chief Justice of the United States Supreme Court.

In 1986, Warren Burger retired from his post as Chief Justice. He commissioned the construction of The National Monument to the United States Constitution. In 1987, he received the James Madison Award for Distinguished Public Service from the American Whig Cliosophic Society at Princeton University. The following year, he received the United States Military Academy’s Sylvanus Thayer Award. He was also awarded the Presidential Medal of Freedom.

In 1933, Warren Burger married Elvera Stromberg with whom he had two children, Margaret Elizabeth Burger, and Wade Allen Burger. He lost his wife on May 30, 1994, when she was eighty six years old. She died in their home in Washington DC.  On June 25, 1995, Burger died of congestive heart failure at the Sibley Memorial Hospital, Washington DC. He died at the age of eighty seven.