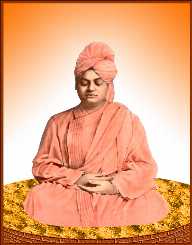 Swami Vivekananda was born Narendra Nath Datta in Calcutta, India on the 12 January 1863. His father was a lawyer. As a child, he used to predict that he would be a monk.

In 1881, he went to Dakshineswar and was introduced to Sri Ramakrishna, a widely respected spiritual Master. Vivekananda went on to visit Sri Ramakrishna on a regular basis and in a time accepted Ramakrishna as his Guru. He also gave up the Brahmo Samaj. Ramakrishna followed a simple devotional path focused on Kali, the Divine Mother.

Swami Vivekananda was then trained and transformed into a sage and prophet with authority to teach. When Sri Ramakrishna died in 1886; he had appointed Vivekananda to be the leader of the monastic disciples. Vivekananda then founded a monastery in Belur Math. For two years, Vivekananda did intense spiritual study and practice, including lengthy periods of meditation.

In 1888, he became a wandering monk, visiting all the holy places as he travelled around India. He begged for food and concentrated on his spiritual path, and he also started accepting disciples.

In 1893, Swami Vivekananda was invited to represent Hinduism at  Chicago’s World Parliament of Religions. He sailed from Bombay in May 1893 with very little money, but with the assistance of Professor John Wright of Harvard University and other sponsors. As a representative of the Hindu religion, Vivekananda gave a speech at the opening of the conference on the 11 September 1893 and was given a standing ovation by the audience of seven thousand.

Vivekananda then travelled around America delivering speeches on his Vedanta philosophy. He also acquired disciples, and in 1894, he founded the Vedanta Society of New York. His next stop was England where 1895, he visited Oxford University and had a meeting with Professor Max Muller.

Swami Vivekananda returned to India in 1896 where word of his success in America and England made him a highly respected figure. His homecoming was widely celebrated. From then on, he used his power to talk about India’s spiritual heritage and also spoke about issues facing the country such as inadequate education, women’s rights, and the caste system.

Historians credit Vivekananda for being responsible for a new wave of national pride and enthusiasm. Gandhi, Pal, Tilak, and Netaji all acknowledged Vivekananda’s influence upon their thinking.