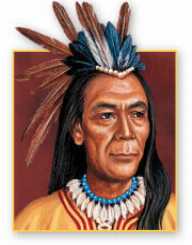 He became an American Indian chief and was one of three leaders that established the Iroquois Confederacy.

Hiawatha led the Onondaga people and the Mohawk people. In colonial times, the Iroquois tribes fought each other. The leadership of Hiawatha, Deganawida, also known as the Great Peacemaker, and Jigonhsasee, brought the tribes together.

Jigonhsasee was also known as the Mother of Nations.

Hiawatha's speaking skills were hugely influential in the decision of the nations to come together.

The first time the Iroquois name appeared in writing was in 1603, in the journal of Samuel de Champlain.

Hiawatha left a great legacy, with around 45,000 Iroquois registered in Canada and approximately 80,000 in the United States.

He has many places and things named after him. These include parks, neighborhoods, and ships in the U.S. Navy. There is also a street, a forest, and a lake.