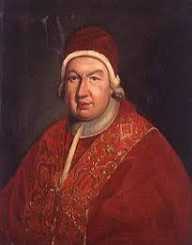 Bernard Garnier was elected as Pope by a small faction of Cardinals opposed to the election of Martin V as the new Pope. Council of Constance elected Martin V as the new Pope deposing the incumbent Antipope Benedict XIII in 1417. With the election of Martin V as Pope, the Western Schism between Avignon and Rome came to an end. Deposed Antipope Benedict XIII tried his best to protect the Western Schism from his castle in Peñíscola in Valencia. He regenerated his court by appointing four new Cardinals before his death in 1423.

King Alfonso of Aragon was also in favor of protracting the Schism. The College of Cardinals loyal to King Alfonso thus elected Clement VIII as the new Antipope in 1423. He held the post until his abdication in 1429 A.D. One of Benedict XIII’s Cardinals, Jean Carrier did not attend the conference held to elect the Antipope as he was not invited.

He, along with other Cardinals, chose Bernard Garnier as the latest claimant to the papacy. Upon his election, Garnier became Benedict XIV, and as he had to counter an already serving antipope in the form of Clement VIII, he was also termed as Antipope.

Very few people within the church supported the candidature of Garnier as a claimant to the papacy. Thus, he tried to avoid public glare by conducting his office very secretively. He did not even disclose the location of his residence due to security reasons.

As such, he became known to the public as the ‘Hidden Pope.’ He did not have many followers. His reign ended with his death in 1429. Garnier was the Sacristan of Rodez, County of Rodez, near Toulouse before his elevation as Antipope.