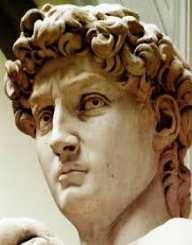 David was the second king of Israel. His life story is part of the Hebrew Bible.

David was born in the city of Bethlehem, Judah, Israel. His father’s name was Jesse, and his mother’s name was Nitzevet. He had eight siblings. He became a shepherd at a young age. He was a skilled lyre player and psalmist.

David started working at the court of Saul, the first king of Israel. He developed a close friendship with Jonathan, the king’s son. He fought in the war between Israel and the Philistines. He offered to fight the giant Goliath. He managed to kill him using only a sling. This brought him great fame all over Israel. King Saul started fearing that David might take his throne, so he conspired to kill him. David found out about the plan, so he fled and spent several years living in the desert.

King Saul and his son Jonathan died during a battle. The elders of Israel decided to declare David as the new king. He soon managed to conquer Jerusalem, a city that used to belong to the Jebusite tribe. He announced the city the capital of Israel. He brought the Ark of the Covenant there. He then continued to fight battles against other tribes. He fought the Moabites, Edomites, Philistines, Ammonites, Amalekites and the state of Aram-Zobah.

For David, marriage was a way of securing his relationships with different tribes and groups of people. He had many wives and dozens of children. His most famous wife was Bathsheba. He saw her bathing on the roof and called her over. He ended up getting her pregnant. At the time, she was married to a soldier named Uriah the Hittite.

David told Uriah to come home, hoping to convince him that the baby was his. Uriah refused to leave the battlefield. David ordered to have him killed in battle. According to the narrative, David was punished for his sin. His unborn baby died, as well as one of his older sons. He later married Bathsheba and had several children with her.

David passed away around the age of 70. His oldest living son, Adonijah, was initially supposed to take the throne. But before his death, David decided to change that. He appointed Solomon, one of his sons with Bathsheba, as the future king.

David is an essential figure in Judaism and the Christian Old Testament. The New Testament states that he is one of the ancestors of Jesus. He is also mentioned in Islam as a prophet.

During the Renaissance, Italian artist Michelangelo made a marble statue of David. It is considered one of the most famous sculptures in history. Painter Caravaggio created several paintings depicting David and Goliath. David is a character in a significant number of contemporary novels, TV shows, films, and songs.