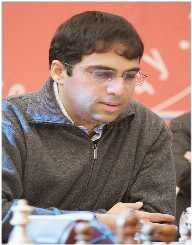 Most of his spectators around the world have described him as an unassuming and straightforward person who, by all means, avoided controversies and politics, only concentrating on his game. Viswanathan Anand, also popular as Vishy, is an Indian highly gifted, five times world chess champion, who started playing chess at only six years of age before improving rapidly to become a Chess Grandmaster.

Viswanathan Anand was born into a Brahmin Family, on 11th December 1969 in Mayiladuthurai, Tamil Nadu, India to Mr. Viswanathan Iyer, former General Manager of Southern Railways and Mrs. Susheela Viswanathan, a housewife, influential former socialite and chess aficionado. He was the youngest of their three children; the others include his elder brother Shivakumar, now a manager at Crompton Greaves, India and his sister Anuratha, now a professor at the University of Michigan, USA.

Shortly after his birth, Viswanathan Anand's family moved to Chennai (called Madras during that time). Between the age of five and six, his mother, together with their then family friend called Deepa Ramakrishnan introduced him to chess for the first time. His future career as a chess player was built by his mother's constant motivation and encouragement.

Viswanathan Anand was later enrolled at Don Bosco Matriculation Higher Secondary School, Egmore, where he completed his secondary school education. He then attended the Loyola College, Chennai where he graduated with a Bachelor of Commerce degree.

Viswanathan Anand started his professional career as a chess player early in his life. At 14 years of age, he became the National Sub-Junior Chess Champion (1983) before winning the title of International Master after winning the Asian Junior Chess Championship held at Coimbatore, becoming the youngest in Indian history to do so at the age of 15. He defended this title again in 1985 in Hong Kong, China.

At 16 years old, Viswanathan Anand was already the National Chess Champion before winning the Shakti Finance International Chess Tournament in Coimbatore, India at the age of 18, again, becoming the first Indian Grandmaster.

In 1991 and at the age of 22, Viswanathan Anand won the Reggio Emilia Tournament, the most renowned tournament in Italy. He won this tournament ahead of some of the then greatest chess players like Garry Kasparov and Anatoly Karpov. Two years later, he tried his luck in the World Chess Championship but lost to Karpov in the quarterfinal match.

In 1995, the World Championship had been split, and Anand played in both versions. He played and won matches against Michael Adams, Gata Kamsky and Oleg Romanishin in the PCA World Chess Championship (also called the Classical Chess Versions). He, however, lost to Russian legend Garry Kasparov in the finals.

In 1998, Garry Kasparov introduced Advanced Chess Tournament which Viswanathan Anand won three times in a row in Leon, Spain.
After several years of attempts, Vishy finally played in the World Chess Championship final against Alexes Shirov and won this title for the first time.He, however, failed to defend this title in 2002 when he lost in the semi-finals to Vassily Ivanchuk.

Viswanathan Anand also became the 4th player in history to pass the 2800 Elo mark on the FIDE rating list in April 2006 after Vladimir Kramnik, Garry Kasparov and Veselin Topalov.

In the year 2007, once again, Viswanathan Anand won the championship in Mexico. He was the only undefeated candidate in that tournament. He successfully defended this title in 2008 when he played in the finals against Kasparov before winning it again in the year 2010 and later in 2012 when he played against the defending champion Boris Gelfand winning the last match in only 17 moves.

Viswanathan Anand was, however, defeated by the winner of the 2013 Candidates tournament, Magnus Carlsen, who became the new World Chess Champion.

So far in his career as a chess player, Viswanathan Anand has won several prestigious awards. In 1991-1992, he won the Rajiv Gandhi Khel Ratna Award. This was the first time this, India’s highest sporting honor award was given.

Viswanathan Anand was also awarded the Padma Vibhushan in the year 2007, the second highest civilian award for his success in chess. When the then Indian Prime Minister Manmohan Singh hosted the then US President Barrack Obama on 7th November 2010, Anand was the only sportsperson invited to the dinner.

Viswanathan Anand married his wife Aruna in 1996 and was blessed with one son named Akhil. He joined the Olympic Gold Quest board of governors in August 2010. It is an organization formed to support India’s young talents.

Apart from Tamil and English, Anand also speaks other three foreign languages,i.e., French, German, and Spanish. For the past decade, Anand has been living in Spain though he still retains Indian Citizenship. This decision to stay in Europe has been criticized by many, but Anand considers it a practical one, as Europe is the hub of most chess players and most championships are hosted.