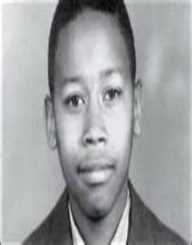 Vigil Lamar Ware was born on December 6th, 1949. He is remembered as a victim of the Civil Rights Movement. On the same day that a bombing took place in Birmingham, (September 15th, 1963), Ware was shot dead by two white teenagers.

Vigil Lamar Ware was born on December 6th, 1949. He was the son to James and Lorene Ware and the third born of six siblings. He grew up in Alabama at a time when racial segregation and equality conflicts were on a high.

Ware, then, studied at Sandusky Elementary School and played for his class football team. He also made extra money by delivering coal. Before facing his fateful death, he had the dream of one day becoming an attorney.

One Sunday morning, September 15th, 1963, a bomb went off, killing four girls at 16th Street Baptist Church. Racial tension then built up in the city. On this day, Virgil Ware, alongside his brother had set out to look for a bike to participate in a paper route.

This mission would later turn out to be 13-year-old Ware's last. He met two white boys, Michael Lee and Larry Joe Sims. The two had gone to a segregationist function earlier in the day.

On the thought that Ware and his brother also participated in the demonstrations, Lee drew his gun and shot in the air to scare the two brothers. Lee's gunshots caught Ware in the chest and face, and he died from the injuries. He was buried but almost forgotten until after his death story was shared.

In 2004, donations were made, and Virgil Ware reburied with a marker. His name eventually included into Birmingham's Gallery of Distinguished Citizens (2013), as a sign of honor and recognition.