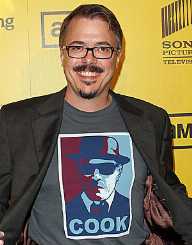 Vince Gilligan is an American screenwriter and TV producer who was responsible for some critically acclaimed series, most notable of them is AMC’s Breaking Bad. He was also responsible for the script of Hancock, a superhero film starring Will Smith and Charlize Theron.

One of his earlier successes is attributed to winning a 1989 screenwriting contest for one of his college classes that in turn, was made into a film starred by Drew Barrymore. The film came to be known as Home Fries, was released in 1998.

Vince Gilligan resides in Los Angeles, California with his long-time girlfriend, Holly Rice. The two have been together since 1991.

George Vincent Gilligan Jr. Was born in Richmond Virginia on February 10, 1967. He is the eldest of two children, with his younger brother Patrick. Gilligan’s parents worked as an insurance adjuster and teacher. In 1974, his parents divorced, and Gilligan relocated to Chesterfield County for high school.

Vince Gilligan inherited his father’s passion for classic films and became engrossed in storytelling at a young age. To add more leverage, he often visited his grandfather’s bookstore in Richmond, picking up books on science fiction and comic books.

Vince Gilligan graduated from high school in 1985 and enrolled to New York University’s Tisch School of the Arts where he majored in film production under a partial scholarship.

Before working on Breaking Bad, Vince Gilligan worked as a writer and producer for the X-Files for some years. He was formally introduced to X-File’s creator, Chris Carter back in 1994 while he was still residing in Richmond. Before he became a regular writer to the series, he was initially requested to write for freelance. He also worked as an executive producer at the series’ spin-off, The Lone Gunmen.

Fast forward to 2007; his breakthrough success was Breaking Bad. At the time, AMC was searching for another series that is akin to Mad Men, one of their successful shows when Gilligan met with the executives of the network.

Bryan Cranston and Aaron Paul took the starring role of the series which became a hit. It ran for five seasons and went on to win multiple awards. The series tells the story of a struggling over-qualified chemistry teacher who’s struggling to make ends meet and ultimately resorted to the production of meth and later on becoming a notorious drug lord.

The idea for the show was conceived back in 2004 when a friend of Gilligan related to him of a man in the apartment who was presumed to be cooking meth in the premises.

Besides being responsible for the script of Home Fries and Hancock, Vince Gilligan also worked on Wilder Napalm starring Debra Winger and Dennis Quaid which was released in 1993.