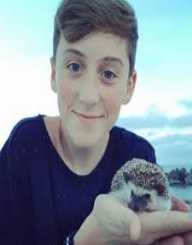 YouTube personality and singer Trevor Michael Moran was born on the 30 September 1998 in Poway, California to Tim and Nicole Moran. He has one sibling, a brother Blake.

When Trevor Moran was ten years old, he joined YouTube and began appearing in videos to songs from the Itunes Store which became known as the Apple Store Dances. By 2012 he had joined one the YouTube Channel O2L, standing for Our2ndLife. The group consisted of Sam Pottorff, Ricky Dillon, Kian Lawley, Justin Caylen and Connor Franta. The channel was popular, and by the time they closed it down, the channel had over three million subscribers.

Trevor Moran took part in The X-Factor television show in 2012. He sang Sexy, and I know It and received four votes. He was eliminated at a later stage of the show.

After the release of his first single, Someone, in September 2013, Trevor Moran released The Dark Side in December of the same year. The Dark Side charted number 25 on the Billboard Dance/Electronic Digital Songs chart.

In December 2013 he released his first single, Someone, which was followed by The Dark Side. Echo was released June 2014 followed by XIAT, Now or Never and Slayt. His debut EP XIAT reached number 1 on the US Heat chart and in June 2015 I Wanna Fly came out. This was followed up by Let’s Roll late in the year. Ricky Dillon ‘s album GOLD featured Moran.

In 2014 he was the Teen Choice Awards: Comedy award, and in 2015 he was runner-up to Christina Grimmie in the Macy's iHeartRadio Rising Star Awards.

Trevor Moran announced on YouTube in October 2015 that he is gay.