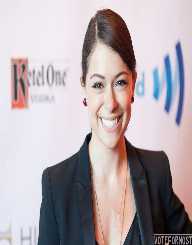 Tatiana Maslany is a Canadian actress who is best known for her lead role in the sci-fi thriller Orphan Black.

Tatiana Maslany was born on 22 September 1985 in Regina, Saskatchewan, Canada. Her parents are Dan and Renate Maslany. Maslany’s mother taught her German as a child before Maslany learned English. Maslany also attended a French immersion school so is multilingual. Her father worked as a woodworker. From an early age, Maslany enjoyed performing and took up dance at the age of four and began appearing in community theatre productions from the age of nine. Maslany attended high school at Dr. Martin LeBoldus High School, from which she graduated in 2003. While in high school Maslany continued to act and traveled a lot for work. After graduation, Maslany moved to Toronto.

Maslany began finding work in improvisation theatre and took part in comedy improvisation routines for over ten years. Maslany landed the role of Rome Greyson in the Canadian children’s TV show, 2030 CE, in 2002. The show ran for two seasons and twenty-six episodes and was aired in both Canada and the USA. The show was sci-fi adventure and was set in a dystopian future were all humans die by the age of thirty. In 2004, Maslany played a major role in the horror film, Ginger Snaps 2: Unleashed. The film sees Maslany aid a werewolf in her escape from a drug rehabilitation hospital before she transforms and kills everyone. The film received mostly positive reviews but was unsuccessful at the box office. Maslany appeared in another horror film, The Messengers, in 2007. The film saw Maslany act alongside Kristen Stewart.

Maslany became a recurring character on the CBS TV series, Heartland, the same year. In 2010, Maslany began appearing in, Being Erica, a Canadian comedy, as a heroin addict. The same year Maslany won the breakout role award at the Sundance Film Festival for her role as Ruby in Grown Up Movie Star. Maslany also enjoyed film festival success in the lead role of the film, Picture Day. The following year Maslany appeared in two episodes of the American networks NBC’s, Parks and Recreation. Maslany played the young version of Helen Mirren’s character in, Women in Gold. The film released in 2015 also featured Katie Holmes and Ryan Reynolds. Despite making headway in major films, Maslany continued to appear in independent films such as, The Other Half and Two Lovers and a Bear, both of which were released in 2016.

Maslany’s best-known role though was in the Canadian TV show, Orphan Black. The film is set in an alternative world was cloning is common. Maslany plays the lead character in the show, Sarah Manning, as well as all her clones that appear in the show. The show is distributed in America by BBC America. The show has aired four seasons of ten episodes each and is scheduled for a further ten episodes for a fifth season.

Tatiana Maslany lives with her boyfriend, Tom Cullen in Toronto. Maslany was nominated for a Golden Globe in 2014 for her role on Orphan Black. She won an Emmy in 2016 for the same role.