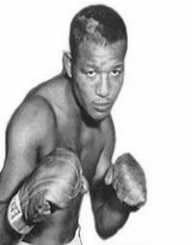 Sugar Ray Robinson was a former Welterweight and Middleweight boxer. He was a six-time world champion.

Born Walker Smith Jr on May 3, 1921, to parents Walker Smith Sr and Leila Hurst. He was the youngest of three living in Ailey, Georgia. He has two older sisters: Marie and Evelyn. The family moved from Georgia to Detroit to work in construction, working two jobs to support the family. When he was eleven years old, his mother moved herself and the children to Harlem, working as a dancer to help the family.

Walker originally wanted to become a doctor, but he dropped out of De Witt Clinton High school in ninth grade. He then switched his goal to boxing. Walker’s first exposure to boxing was when the family joined Salem Methodist Episcopal Church, where George Gainford started a boxing club. At the age of fifteen, he borrowed an Amateur Athletic Union membership card, whose name was Ray Robinson. When George saw how Walker boxed, he commented that Walker’s style and fluid motions were "sweet as sugar.”. The moniker stuck, and Walker went by Sugar Ray Robinson in his career life.

Sugar Ray Robinson made his professional debut on October 4, 1940. Winning his first New York Golden Gloves championship, 19-year-old Sugar Ray decided to turn pro after winning Golden Gloves in the featherweight division in both 1939 and 1940. In 1942, he won the tournament with fourteen wins straight, amassing a 40-0 record since he turned pro.

His zero loss record ended when he lost to Jake LaMotta, the former Middleweight champion in 1943. In their first fight year before, Sugar Ray Robinson was knocked out by LaMotta, but he won by decision. Their 1943 fight was brutal, as Sugar Ray Robinson was knocked out again, and LaMotta proceeded to win the round by decision, ending the winning streak.

Sugar Ray Robinson was inducted into the army in 1943, during World War 2. He had a fifteen-month career in the army, serving with Joe Louise. In 1944, Sugar Ray was found in Fort Jay Hospital on Governor’s Island, under suspicion of deserting as he missed his ship to Europe. He suffered from amnesia after falling down the stairs in his barracks, and he could not remember anything until waking up in hospital. He was examined and found to be suffering from a mental deficiency and was granted an honorable discharge in June 1944.

Sugar Ray Robinson refused to cooperate with the Mafia and was denied the chance to compete in World Welterweight Championship despite beating all the contenders in that category. He defeated Tommy Bell in a fifteen round decision game, realizing his dream of Welterweight Champion in December 1946.  He had a ninety one fight winning- streak by then. Sugar Ray Robinson managed to reign until 1951. And by 1958, he was the first boxer to win a divisional world championship five times. Sugar Ray beat LaMotta to acquire the middleweight division champion title and kept it from 1951 to 1960.

In 1952, Sugar Ray Robinson announced his retirement after the Maxim bout, he had a record of 131–3–1–1. He ventured into business and show business, for three years. But the decline and lack of funds prompted his return in 1954, where he won another middleweight championship against Bobo Olson.

Due to his age, Sugar Ray struggled with the younger boxers, who could outlast him in the ring. After losing several rounds in 1964 and 1965, he announced his final retirement at the age of 42. With a record of 173 wins with 108 knockouts in two hundred professional bouts.

In his autobiography, Sugar Ray Robinson had spent all the money he made during his career inside and out of boxing. He was parading around Harlem with a pink Cadillac and always brought a large entourage with him. After his last fight, he was honored with a Sugar Ray Robinson Night on December 10, 1965, and a trophy.

After retirement, he ventured into acting, showing up in Mission: Impossible, The Detective, Candy, and The Todd Killings. Sugar Ray Robinson was elected to the International Boxing Hall of Fame in 1967. He remains the greatest pound for pound boxer in history.

Sugar Ray Robinson Youth Foundation was founded in 1969, in the inner Los Angeles area, but it does not sponsor a boxing program.

Sugar Ray was a Freemason and a Christian.

In 1965, Sugar Ray Robinson married Millie Wiggins Bruce. He was diagnosed with diabetes and Alzheimer’s later in life. He died at the Brotman Medical Center in Culver City, California on April 12, 1989. He was 67 and was interred in the Inglewood Park Cemetery, Inglewood, California.