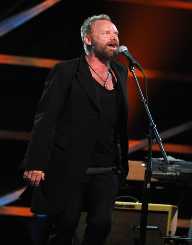 Gordon Matthew Thomas Sumner also known as Sting is a multiple award-winning English actor, singer, and songwriter. Born on October 2, 1951, he spent almost a decade of his career (1977 to 1986) as the lead singer, bassist a songwriter for the rock band, the Police. The band released albums like Outlandosd’Amour, Reggatta de Blanc, and Synchronicity among others.

Aside from being instrumental in the Police, Sting also pursued a solo career in 1985 and had collaborated with several musicians including Craig David, Dire Straits, Alison Krauss and Bryan Adams. In his solo and career with the Police, Sting received 16 Grammy Awards and had Emmy and Golden Globe Awards. In 2003, he was inducted into the Rock and Roll Hall of Fame and had a star on the Hollywood Walk of Fame.

Sting was born on October 2, 1951, in Wallsend, Northumberland in England. He is the first child of four by Audrey (née Cowell)and Ernest Matthew Sumner. His father was an engineer and milkman and his mother a hairdresser. Growing up he developed an interest in music and would usually visit nightclubs to watch the performances of Cream and Manfred Mann. They will later influence his music career. Sumner received education at St Cuthbert’s Grammar School in Newcastle.

In 1971, he enrolled at the Northern Counties College of Education currently Northumbria University graduating as a qualified teacher in 1974. After his graduation, he taught for two years at St. Paul’s First School in Cramlington.

While pursuing a teaching career, Sting still found time to perform jazz in the evening and during weekends. During the early stage of his career, he worked with bands like Last Exit, Phoenix Jazzmen, and Newcastle Big. That was the period when he gained the nickname Sting.

Sting along with Stewart Copeland and Henry Padovani formed the Police in 1977. Andy Summers later replaced Padovani. The band became very successful releasing hit after hit with most of their albums charting on the UK chart. The band started with punk-influenced sounds and later changed into reggae rock and minimalist pop. Their debut single Roxanne, in 1978 but was not an instant hit. The band later that year toured around the United States playing in clubs including CGCG’S in New York City.

Their first album Outlandosd’Amourwas released in 1978 and was successful, making it unto the British and American charts. They re-released Roxanne, and this time around, it became a hit. Most of the songs on the album were written by Sting. From 1978 to 1983, they have already won six Grammy Awards and two Brit Awards in various categories. Their albums include Outlandosd’Amour, 1978, Reggatta de Blanc, 1979, ZenyattaMondatta, 1980, Ghost in the Machine, 1981 and Synchronicity in 1983. The latter album won them five Grammy Awards nominations. The group broke up, and member decided to pursue a solo career.

They will later in 2007 reunite to open the 2007 Grammy Awards. They also announced The Police Reunion Tour, with the first concert held in Vancouver on May 28, 2007. They also toured in countries including Australia, Japan, New Zealand, went to Europe, South American and North America,

Sting debuted as a solo artist in 1985 with the release of the album The Dream of the Blue Turtle. The album featured jazz musicians like Branford Marsalis, Kenny Kirkland, Omar Hakim and Darryl Jones. The album produced the hit singles including If You Love Somebody Set Them Free, Russians, Love is the Seventh Wave and Fortress Around Your Heart. The album became very successful attaining Triple Platinum with a year and receiving four Grammy Award nominations including Album of the Year.

His next album was …Nothing Like the Sun in 1987. It had the single Be Still My Beating Heart, which was dedicated to his mother who died of cancer. The album achieved double Platinum, won the Best British Album at the 1988 Brit Award and three Grammy Awards nominations. Sting dedicated his The Soul Cages album released in 1991 to his dead father. The title track of the album won a Grammy Award. Soon to follow was the album Ten Summoner’s Tales, which achieved triple Platinum and had hit songs like Field of Gold and If I Ever Lose My Faith in You, which won him Best Male Pop Singer as the 36th Grammy Awards. His other albums include Mercury Falling, A Love Affair: The Music Of Ivan Lins, Song from the Labyrinth, The Last Ship among others.

Aside from music, Sting also did some acting works appearing in several films. He appeared in the sci-fi drama Dune, 1984, the crime film Lock, Stock, and Two Smoking Barrels in 1998. He has also done the soundtracks for films including The Mighty(1998), The Thomas Crown Affair (1999) and The Emperor's New Groove(2000).

Sting married twice first to actress Frances Tomelty on May 1, 1976. They had two children, Joseph and Fuchsia Katherine. The couple divorced in 1984. Sting had a relationship with actressTrudieStyler starting from 1982. After ten years of dating, they finally married on August 22, 1992.

They have four children, Brigitte Michael, Jake, Eliot Pauline, and Giacomo Luke. Sting has several homes across the world and according to the Sunday Times Rich of 2011; he is among the ten wealthiest in British music. Sting says his children would not inherit his wealth stating that his riches are "albatrosses round their necks."