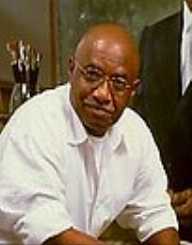 Simmie Knox is an American real-life painter who is famous for painting various luminaries including former US president Bill Clinton.

Simmie Knox was born to Amelia and Simmie Knox Sr. on August 18, 1935, in Alabama. He was raised initially in Aliceville by his parents. After his parents divorced, he went to stay with his aunt in Leroy Alabama. He worked daily on the farm with his eight cousins until he went to school. Knox was an athletic person. He played baseball in his school team.

In 1948, Knox was hit by a baseball in the eye while playing. His teachers suggested that he should do something else while he recuperated. Knox started painting to help his injured eye heal. The Catholic nuns noticed his talent ability and took him to a local artist. His school did not have an art teacher. Knox apprenticed under the watch of the local postal employee who was also a gifted painter.

After his elementary education at The Most Pure Heart of Mary Catholic School, Simmie Knox went to Central High School. He graduated from Central high in 1956 and briefly joined the US military. In 1962 Knox enrolled for his degree at Delaware State College to study Biological Sciences. He supplemented his finances by working at a textile production factory.

His lecturers noticed his detailed microorganism drawings. They told him to pursue arts. In 1963 Knox transferred to study Arts at University of Delaware. He then joined Temple University and graduated in 1970. In 1972 Knox got his master degree from Temple University. He worked as a part-time lecturer at the Lincoln University in Pennsylvania.

Simmie Knox experimented with all types of art paintings. His lecturers persuaded him to venture into abstract art paintings. In 1972 Knox relocated to the US capital Washington D.C. He painted abstracts for exhibitions and also taught arts in government schools. He spent most of his teaching time at the Bowie State College in the state of Maryland. He also taught at the Duke Ellington College in the US capital.

In 1974 Knox produced a real-life portrait of civil rights leader Dr. Martin Luther King Jr. He became a sought after artist. In 1975 he got a contract to create a picture of slave trade abolitionist Frederick Douglass. The portrait is housed at the Smithsonian Museum.

From the beginning of 1990, Simmie Knox has been painting celebrity paintings from all over America. He started with painting his friend comedian Bill Cosby. Cosby implored his friends to commission Knox for portraits. Over the years Knox got business from clients courtesy of Bill Cosby. Knox painted US Supreme Court Judge Thurgood Marshall and Justice Ruth Ginsburg. He also painted Mayor David Dinkins and his wife. Other notables he has portrayed are famed Roots writer Alex Haley, Legendary boxer Muhammad Ali, Dr. Dorothy Height and former US Cabinet secretary Hazel O’Leary.

Knox had his major commission in 2000. He was approached to paint the official portrait of President Bill Clinton and the first lady. He took two years to complete the picture that was hung in the presidential Oval Office in Washington in 2004. Knox became the first ever African American artist to paint an official presidential portrait in the US. He has been quoted as having the wish to paint the late South African leader Nelson Mandela.

In recent years, Simmie Knox has painted other major figures in American politics and the entertainment industry. Some of them are former US Attorney General Eric Holder, New York Governor Andrew Cuomo, and Baltimore Mayor Clarence Burns.

His works are displayed in major exhibitions and art galleries in the US. His work is also exhibited in the Us Senate in Washington. Knox works from his garage workshop in Silver Springs in Maryland.

Simmie Knox is married to Roberta. His earlier marriage ended up in a divorce. Knox has three children. His daughter Sheri is from his first marriage, while Zachary and Amelia are from his union with Roberta.

The son of a carpenter father, Simmie Knox did not have a pleasant childhood. He experienced poverty first hand. After his parents divorced, he became a sharecropper in his aunt’s family. His resolve was to make it in life. He tried baseball and got a black eye.

He tried becoming a scientist in college and did not succeed. Knox was cut out for the world of arts. When he attempted to pursuing arts, Knox became a celebrated genius in portrait painting. Everyone has a talent deep within. Discover and master it, and the world will celebrate you.