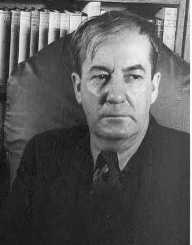 Sherwood Anderson was born on the 13th of September 1877.He was born in a small farming town, Camden, Ohio. He was the third child of Irwin McLain Anderson and his wife, Emma Jane. He had six siblings.

The family was well off financially until they started to move from place to place. As they moved, their fortunes seemed worse and worse until Sherwood’s father could barely hold down a permanent job that could fend for the family. This led Sherwood to begin picking up odd jobs to support the family. He seemed to have a knack for it, and that earned him the nickname Jobby.

Over the years, Sherwood worked as a newsboy, errand boy, stable groom, newspaper boy. He also assisted his father in his job as a sign painter. Due to his holding down jobs, Sherwood started skipping school, and by the age of fourteen, he dropped out completely from high school. He would go back to complete high school years later.

As a youngster, Sherwood was a voracious reader. He read books from the school Library and a local’s artist’s library to feed this interest. He also did a bit of writing.

By the time, Sherwood Anderson was eighteen years old; his family had begun to unravel. His father’s intermittent disappearances became permanent. On May 10, 1895, his mother died of tuberculosis. This triggered him leaving Clyde where he had been living with his family. He left town despite a five-year contract with Ohio National Guard, a romantic relationship and other promising job positions.

A few years down the line he founded his own company, Anderson Manufacturing Company. His company carried roof fixing. Sherwood Anderson was successful in his business. He had always been known to be a very talented salesperson and very convincing with advertising. All the experience he had acquired and exercised in his teenage years contributed to his success. He had a family and enjoyed a comfortable social status.

At the peak of his success, Sherwood suffered a nervous breakdown. This led him to let go of his business and the collapse of his marriage at the time.

Sherwood Anderson went into writing full time. His first novel was published when he was forty years old. He got a three-novel contract with John Lane. He published his first novel, Windy McPherson's Son in 1916. Marching Men in 1917 followed this. These novels were considered to be amateur and inferior to his later works. He produced his first brilliant, widely accepted and one of his most notable works Winesburg, Ohio in 1919. It was a collection of interconnected short stories. The opening story, Hands, was considered his first real work. His most celebrated stories are contained in the collection of short stories in The Triumph of the Egg (1921), Horses and Men (1923), and Death in the Woods (1933).

Other notable books by him include Mid-American Chants (1918), Poor White (1920), his autobiography A Story Teller's Tale (1924) and his semi-autobiographical novel Tar: A Midwest Childhood (1926).

Many of his books were relatable because they were based on his experiences. He drew stories especially from his almost nomadic lifestyle, moving from city to city. His only bestseller novel Dark Laughter (1925) was inspired by his time in New Orleans in the 1920s.

The last book by Sherwood Anderson was written in 1940. It is an all-encompassing essay titled Home Town.

Sherwood Anderson was known to not stay in a particular place for too long. He moved around a lot. He was also known to have had some marriages and divorces.

Anderson married his first wife Cornelia Lane in 1904 in Ohio. They had three children together before they got divorced. Their children were Robert, John, and Marion. They were divorced in 1912.

He married his second wife, Tennessee Mitchell in 1916 in Reno Nevada. He married his third wife, Elizabeth Prall in 1923 inNew York

He finally married his last wife Eleanor Gladys Copenhaver in 1933. They were both active in Trade unions. They were also seen traveling and studying together. They were married until he died.

In 1927, Sherwood Anderson acquired a farm he called Ripshin Farm in Troutdale, Virginia. He had gotten it for summers, but in advanced years, he settled there. There he continued to write by contributing to a local newspaper.

Sherwood Anderson was a regular church-going professor of the Christian faith.

Sherwood Anderson was on a cruise to South America with his wife, Eleanor in 1941. He began to complain of abdominal discomfort. They disembarked from the ship and went to Colon, Panama where he was diagnosed with peritonitis. He died at the hospital on the 8th of March 1941. He was aged 64.