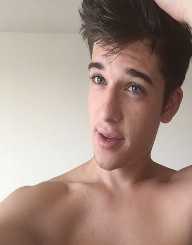 Model and Instagram star Sean O’ Donnell was born in New York City on the 28 May 1996.

Sean O’ Donnell started out in social media with a blog on Tumblr with photographs of himself as well as his photographs.

Sean O’ Donnell has built up a large social media following.His Instagram account has a million followers. He is also on Twitter and Facebook. O’Donnell was one of the hosts of Winter Lights LA in 2014. He has features on music videos including an Alli Simpson music video.