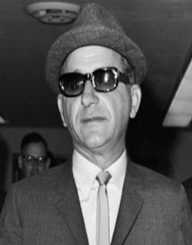 Sam Giancana is an American crime lord of Italian descent who is known for his notorious activities and organized crime-handling and is also tied in connection with the CIA. His profile as a mobster has been the basis of a number of characters in films and literary pieces. One of his daughters, Antoinette, wrote a book involving him entitled Mafia Princess which was adapted in a TV film of the same name in 1986 with actor Tony Curtis taking his persona. The 1998 film Rat Pack also included Giancana’s profile, and his character was played by Robert Miranda.

On September 23, 1933, Giancana married the daughter of Italian immigrants; a woman named Angelina DeTolve. The couple had three daughters together named: Antoinette, Bonnie, and Francine. Their marriage lasted for 21 years until DeTolve's death in 1954 which led to Giancana raising his three daughters by himself.

Born on June 15, 1908, as Salvatore "Sam" Giancana on Chicago's West Side, his parents were Sicilian immigrants from Partanna, Italy.

From Henchman to Notorious Crime Lord

Sam Giancana's life in crime started when he joined Al Capone's juvenile street crew called The 42 Gang. He started as a helmsman at the 42 Gang and worked his way up to higher positions as time went by. He became Al Capone's getaway driver and was arrested for auto theft in 1925 for the first time. Besides being an excellent driver, he also became involved in heinous crimes and became one of the group's triggerman. He was considered as the prime suspect to three murder investigations at the age of 20 but was not tried for the said crime.

He extended his participation in crime by joining the Chicago Outfit during the 1930s which were another notorious crime mob located in Chicago. He was the first member of The 42 to join the group where he slowly rose in ranks and soon took control of the illegal dealings such as the liquor distributions, political rackets and protections, and gambling to name a few.

CIA Involvement and the Kennedys

With Chicago at the palm of his hand, Sam Giancana held connections to various people of great importance such as former US President John F. Kennedy and Attorney General Robert F. Kennedy. Many people have firm belief that Giancana had a hand at the ballot stuffing in Chicago during the presidential elections which were a vital factor in securing Kennedy’s win. When JFK was assassinated in 1963, suspicion fell on Giancana’s shoulders as to what others may refer as his revenge against the president’s ingratitude and support of the crusade against organized crime backed by RFK.

It was also during the 1960s where Giancana’s name was tied alongside the CIA for conspiring an assassination plot against Cuban leader Fidel Castro.

The Death and Murder of Giancana

Sam Giancana was 67 years old when he was murdered on June 19, 1975, at his Oak Park home. He was supposed to appear for the Church committee regarding the Mafia and CIA involvement about the assassination plot of Fidel Castro. He died from a headshot wound from the back of his head by a .22 caliber gun at point blank range and was also shot multiple times in the body and neck.

Before his death, he underwent gallbladder surgery in Houston, Texas and returned to his Oak Park home to recuperate on June 17, 1975.